How water and wine shaped a civilization: Adrianna Catena 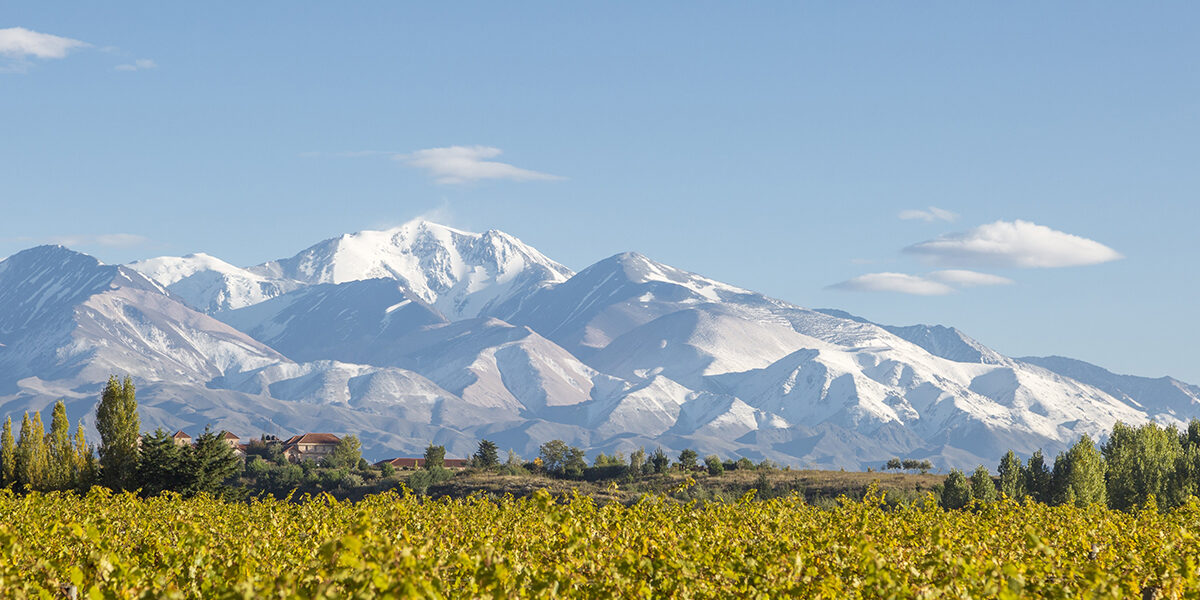 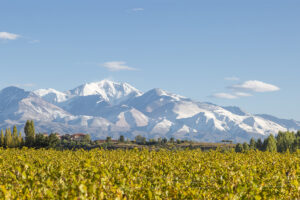 Dr Adrianna Catena – of Catena Zapata and El Enemigo – is not just a winemaker, but a practicing historian. We sat down with her to talk about how wine shaped South America’s social landscape and how water conservation and sustainable irrigation practices will secure its future.

The most famous vineyard in Argentina is named after Dr Adrianna Catena, who is the youngest daughter of pioneering vigneron Nicolás Catena Zapata. As well as her viticultural endeavors at Catena Zapata and her partnership with Alejandro Vigil as co-founder of the cult Argentine winery El Enemigo, she is a practicing historian. Her area of interest is the 15th and 16th century Americas – a time when wine (and the vine) were first introduced to the continent following the Spanish conquest. The pivotal role of wine in Catholic ritual, and the dangers associated with drinking fresh water, she believes, would shape the development of wine production in the Americas. For Catena, the intimate relationship between wine and water continues to play a central role in shaping Mendoza’s social landscape. 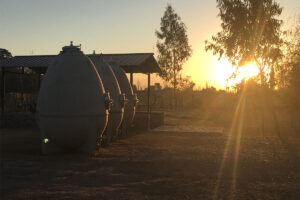 The concrete eggs outside the El Enemigo winery

The history of water and wine in South America is a fascinating topic for Catena. Although her PhD thesis focused on the trade in indigo dye from the Americas to Europe, her attachment to wine – as well as the very real concerns of water scarcity in Mendoza – are subjects important to her as a historian and as a vigneron.

Through the Catena Institute of Wine (CIW), the Catena Zapata winery has pioneered research in viticulture across a broad rand of topics. It includes ground-breaking work on terroir, ageability, and soil biodiversity, as well as in depth studies on extreme elevation vinegrowing in a context of changing climatic conditions – but some of their most pressing work centers around water preservation.

“Water preservation is one of our most important areas of research today,” says Catena. “Organic farming is easier in the very dry climate of Mendoza, than in Bordeaux, where higher rainfall and relative humidity mean vineyards will be more susceptible to fungal diseases – for us, when it comes to a sustainable future and regenerative farming, water preservation is key.” Catena Zapata’s head viticulturalist Luis Reginato is nicknamed “the water guy” at Catena – such is his obsession. “He’s always trialing new, experimental ways to save water.” But she notes, the region has a long successful history of water management for Reginato to tap into. “The irrigation systems developed by the native Huarpe people before the arrival of Europeans were key to successful agriculture in the region, and these systems are still in use today,” says Catena. For centuries, irrigation channels and aqueducts have diverted water from the Andes mountains to terrace lower Andes farmlands, bringing fresh drinking water to the cities. The Incas, Catena says, whose power extended briefly to this region, were quite unique among early modern empires in the quality of their nutrition and a notable absence of famine – made possible by terraced agriculture on the Andean slopes and complex irrigation systems. 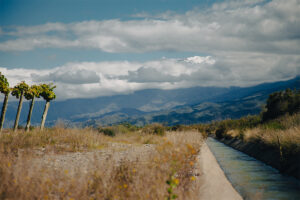 The aqueducts in Mendoza, first initiated by the Huarpes. Photography credit: Catena Zapata

While advanced water networks had been essential to pre-Hispanic and later colonial agriculture, Europeans treated drinking water with caution. “Up until the last century, it was a common belief that water, especially in exotic or tropical regions, could be bad for your health,” says Catena. “Contaminated water could (and can still) kill you and was considered extremely dangerous.” Wine in many parts of Europe (and the Americas, following the Spanish conquest) along with ales and beer, was often considered a safer option. Where they felt there was no access to clean water, wine became an essential part of the diet.

Wine was a key European import in the early days of the Spanish conquest, notes Catena. And for the Spaniards, it was not without its health benefits. “During this period, medicine was humoral, people believed everything you ingested would affect your mood, health, and disposition,” she explains. “In one claim from the time, ‘vino‘ (wine) came from the word ’vena‘ (vein) – it was considered nourishing, and closely resembles blood and was associated with this. Some believed it fortified the veins.”

But, as Catena explains, wine was more than a health benefit for the conquistador. “Wine was also an essential symbol of Christianity and Christianity was a moving force in the Spanish conquest.” The conquest of Mexico would roughly coincide with the start of Luther’s Reformation. The Spanish, for their part, wanted to secure a triumph for Catholicism, and in the inhabitants of the new world, saw millions of souls to fill their ranks against the Protestants. “It was the conquistador’s mission,” she says. “Behind the conquest was a big effort to convert the native population.” Catena explains how wine – as with wheat – was a highly symbolic food for Christianity, representing the blood of Christ. 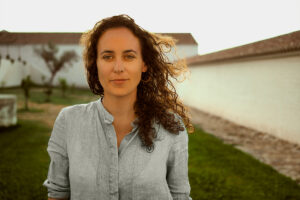 “If you are trying to convert an entire native population to Catholicism, rituals will be fundamental,” she says. Wine had always held a central role in religious ritual and was key to the religious side of the Conquest. Conquistadors, she explains, had to build a church on their land after being awarded territory by the Crown for their service – and they were also made responsible for converting the indigenous population. “In this quest, as one historian put it, to advance the religious and territorial conquest – the two basic foods the Spanish needed were wheat and wine.”

For health, religious and cultural reasons, everyone drank wine in 16th and 17th century South America – it was part of the diet, explains Catena. But as the influence of humoral medicine waned following the Enlightenment – and better sanitation practices were discovered – the perceived symbolic benefits of wine declined.

As the population grew exponentially in the 19th century, so did wine production in Argentina. Italian and Spanish immigrants arrived on the continent, leaving behind their famine-stricken homelands. “Wine consumption reached extraordinary levels,” says Catena, “particularly with the development of the railways.” This new technology enabled the speedy, efficient transportation of wine from producing regions to the Argentine capital of Buenos Aires. 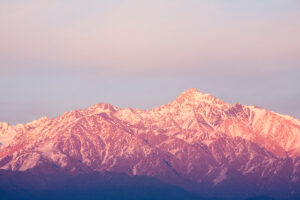 Nicola Catena was one such immigrant, who arrived in Mendoza in 1898 at the age of 17, planting his first vineyard in 1902. A native of Le Marche, from a family of vinegrowers, it was not so surprising that Catena went into wine production. While Mendoza is much like a desert with very little rainfall (between 200 and 400 mm per year), the irrigation channels developed by the indigenous Huarpe people (a nation periodically under Inca rule), were used to divert snow melt from the Andes, enabling farmers to flood farmland when required, making viticulture possible. By the time Nicola’s son Domingo Catena took over, the family had become renowned winemakers in Mendoza.

In more modern times, wine and water’s relationship has changed considerably. Wine in many instances has become a luxury and no longer an essential part of the diet – although Catena says that culturally wine remains a common sight at every meal in Argentina. Under the guardianship of Nicolás Catena and now his daughter Laura, Catena Zapata has become among a growing number of quality-led producers in Mendoza whose wines compete with the finest in the world. Their top wines – Mundus Bacillus Terrae and Nicolás Catena – led the charge in putting Mendoza on the fine wine map.

Water too is no longer viewed with as much caution, but nor is it taken for granted. It barely rains at all in Mendoza – with the region effectively a high-altitude desert. Without snowmelt from the mountains, agriculture here would be impossible, but glacial reserves in Argentina are decreasing. With climate change, water in these parts will no longer be simply available at the turn of a tap. “The preservation of water has become an important concern of winemaking in Mendoza. This is one of the most urgent questions for our region today,” says Catena. 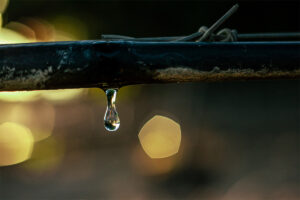 Ongoing research at Catena includes many water-saving experiments. “More than a decade ago we transitioned all our vineyards from the traditional, but wasteful system of flood irrigation, to drip irrigation. Since then, we’ve created reservoirs to capture rainwater, and set up water stations to measure and restrict irrigation to the bare minimum in our family vineyards.” For Catena, “these small changes can have a large and lasting impact.”

The goal at Catena is to manage a regenerative and sustainable agricultural cycle. Catena notes how the Incas were able to transform their environment without causing irreparable damage to it. “We can inhabit this earth without being parasitical,” she says. As members of a larger viticultural community, Catena hopes to share the lessons it has learned from its research, to enable this region that has been shaped by water and wine to continue making high quality wine centuries from now. Optimistically she says, “We believe we are at a tipping point, and the mindset is gathering momentum here more than ever before.”

Since wine was introduced to the continent in the 16th century, there have been huge cultural changes. But the irrigation systems that allowed those first vines to grow remain in use, feeding the countless vineyards, often centuries old. Without water, there will be no wine. With Argentinian wine so popular around the world today, a lot rides on Catena Zapata’s research. The hope is that they can lead the charge, shaping a bright future for this region.

Browse all listings from Catena Zapata