Fighting the tide: Venissa’s quest to save Venice’s vineyards 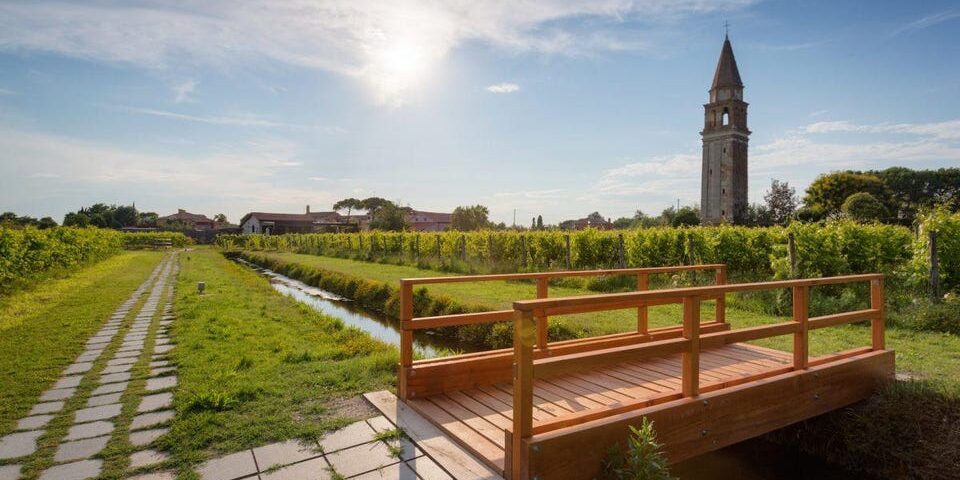 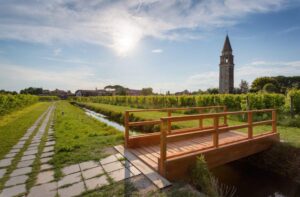 Venissa is an estate like no other, crafting wine from the indigenous Dorona grape grown on islands in the Venice Lagoon. Sophie Thorpe spoke to Matteo Bisol about his family’s mission to preserve this unique Venetian tradition

“I met Anselme Selosse when I was 13 and that really entered in my heart. He’s really a special person that changed the world of wine [for me],” Matteo Bisol tells me. It’s perhaps not what you’d expect of the young winemaker who represents the 21st generation of the Bisol family – a family that made their name with, and has become synonymous with, fine Prosecco.

Meeting the iconic Champagne producer – considered by many the pioneer behind the region’s grower movement – has stuck in Bisol’s mind, however. Partly, he believes, because he was at just the right age – partway between child and adult, his mind open to new ideas. “He was always talking about wine as a living thing, you know,” Bisol says. “I got it and I always thought it was very important.”

He’s been immersed in the family business as long as he can remember. From the age of 10, he spent his summers working in the Bisol winery. “Once I arrived in the morning five minutes late and my father fired me. And then he hired me again because he didn’t want me to leave, being at home doing nothing,” says Bisol, laughing at the memory. 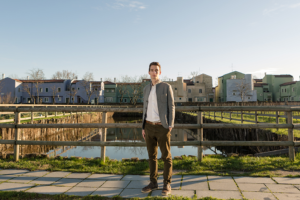 Matteo Bisol amongst the vines at Venissa

But Matteo Bisol has left the hills of Valdobbiadene behind, now in charge of his family’s very personal project: Venissa. It was Matteo’s father, Gianluca that embarked on the adventure over 15 years ago – but somewhat by accident. He was visiting the island of Torcello, which is home to one of the oldest churches in Venice – founded in 639 AD. “In front of the basilica, there’s a beautiful garden – a little bit hidden – but he saw some vine leaves,” Bisol explains. “He knocked on the door of the owner and introduced himself.” Gianluca spoke to the woman that owned the garden, who told him that a few of the vines were a local golden-skinned variety – Dorona. And down the rabbit hole, he went…

He started researching the grape and its history – discovering that viticulture had long been a part of life in the Venice Lagoon. For almost 2,500 years, vines had been grown on the islands – an integral element of the region’s culture. Before motors and speedboats, the islands were a three-hour journey from the mainland, so isolated that they had a totally different culture – “a culture based on nature, based on farming”, Bisol explains. Their isolation forced self-sufficiency, with every bit of space on each island used to grow something. With religion integral to Venice and indeed Italy’s history, wine – used for twice daily mass – was an essential part of life.

This history lives on in local nomenclature: one of the islands is called Le Vignole, one was known as Vigna Murata (now Lazzaretto Nuovo), San Francesco del Deserto was previously called Isola delle Due Vigne, a road on Murano is called Via della Vigne. Many islanders made wine, with presses for the fruit of the vines in their back garden or field. But as the islands of the lagoon became less distant, with the zip of an engine, many of the vineyards were pulled up, and those that remained were destroyed by the catastrophic floods of 1966.

After this initial discovery, Gianluca Bisol started seeking out Dorona vines – a quest that Matteo remembers vividly. “Really from the beginning, I was on the boat, with the bicycles on Sant’Erasmo looking for more Dorona grapes,” he says, describing their search for a variety that was – at the time – on the brink of extinction. It was a farmer, Gastone, on the island of Sant’Erasmo who really opened Gianluca’s eyes to working with Dorona. He was one of the last farmers in Venice to still make wine for personal consumption. 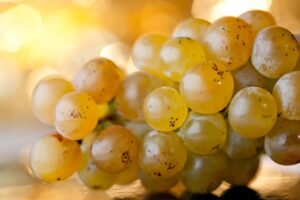 “A great person, a very beautiful person and very wise – he introduced us to the Dorona history and to the way he was making the wine in the past,” Bisol tells me. Thereafter, Gianluca hunted down cuttings and eventually –in 2006-2007 – planted 0.8 hectares of Dorona on the island of Mazzorbo.

It was tradition – rather than current fashions – that led them to make a white wine with extended skin contact. The wine had always been made with skin contact, and they decided to push it further, with a month of maceration, extracting as much flavour as possible from the unique variety. They also decided that the wines needed time to find their balance after such a long period of maceration. They considered barrel ageing, but didn’t want to change the profile of the wines with the flavour of oak, so instead opted for concrete – and two years’ élevage.

The resulting wines have a fine phenolic grip and distinct mineral, even saline, freshness, with a nutty complexity that is reminiscent of mature white Hermitage, Burgundy or Jura Savagnin and Chardonnay – yet also unlike anything else. It’s this unique character that Bisol feels is why the wine is such a success. “We never tried to fit Venissa in any category… we just make the wine that we feel is the right thing for Venissa grapes,” he says

Since the first vintage in 2010, and when Matteo took over in 2013, they’ve learnt a huge amount. “There are parts of the vineyard – different parcels – that have a lower salt concentration in the soil,” Bisol explains. The more saline soils restrict the yield, producing smaller and even more concentrated berries. It was this discovery that led to the introduction of Venusa, a second wine that is made for earlier drinking, in 2017 and comes from the less saline plots. Of course, with two wines, it means that the already tiny volumes of the top white, Venissa Bianco, are even smaller – with just 2,000 bottles made a year. “It’s such a small vineyard that we know the plants one by one,” Bisol says, with an almost paternal fondness.

With each vintage, as well, they have pushed quality even further – learning how to get the most from the previously almost extinct Dorona. They’ve been making the wine for 20 years, but – as Bisol says – “Twenty years means you made it 20 times. Twenty times is nothing. Every year we see how the wine is responding, and we learn every year more things that allow us to make better and better wines.”

And making wine in this remarkable place, with its salt-soaked soils, is far from easy – something that the flood, or “acquaalta”, of November 2019 brought vividly to life. Although the vineyard is shielded by a wall, it couldn’t hold back the water – and once receded they had to wash the vines one by one with fresh water, and the soil as well, to try to remove the potentially catastrophically high salt content. It was only when the vines emerged from dormancy in the spring that they knew whether or not they’d done enough to save them. 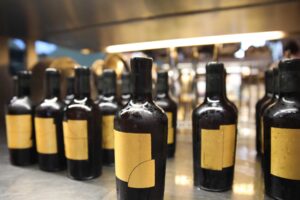 The stunning Venissa Bianco bottles, each one bearing a hand-beaten goldleaf design

“It also reminded us how resilient this grape variety is, which is actually the resilience of Venice – which has been a city or republic for more than 1,000 years,” Bisol says. The Dorona grape, like the region’s people, has adapted to its surroundings. Fortunately, with the introduction of MOSE in 2020, the city’s barrier system designed to shield it from high tides, flooding hasn’t threatened their crop – and vineyard – since.

It’s clear talking to Bisol, that Venissa is much more than a wine. Not only is it a symbol of Venice’s resilience, but a project to preserve the city’s great traditions.The glass bottles come from the island of Murano, but it’s the labels that are particularly special. They work with Marino Menegazzo of Mario Berta Battiloro, the last goldbeater not just in Venice, but Europe – who hammers out a sheet of goldleaf for each and every bottle they produce, from the workshop that once was home to Titian. The design changes each year, with the leaf for each bottle very slightly different thanks to its hand-crafted nature. With Marino Menegazzo in his 70s, and no one to inherit the family business, this tradition – like the Dorona wines – is at risk.

“This part of the history of Venice, it’s an history that is very important and our role at Venissa is really to keep this history alive,” Bisol says. “For us, winemaking is really important, of course my family comes from winemaking, it has a history of 500 years in winemaking. But when we realised the history that was behind this city, behind agriculture and grape growing, and behind all these other handcrafting techniques, it became even more important for Venissa, as our role of preserving the heritage rather than just making a wine… We really believe that preserving our tradition is even more important than winemaking.”

While the family started with just 0.8 hectares on Mazzorbo, they soon started making a red from 2.75 hectares on Santa Cristina (with vines that were previously farmed by the Swarovski family). Now, they’ve planted Dorona on two more islands, harvesting the fruit for the first time this year. Under the Bisol family’s protective eye, it’s clear that this special Venetian tradition has found its guardian angel.

If you want to find out more about the wines of Venissa, please contact us.