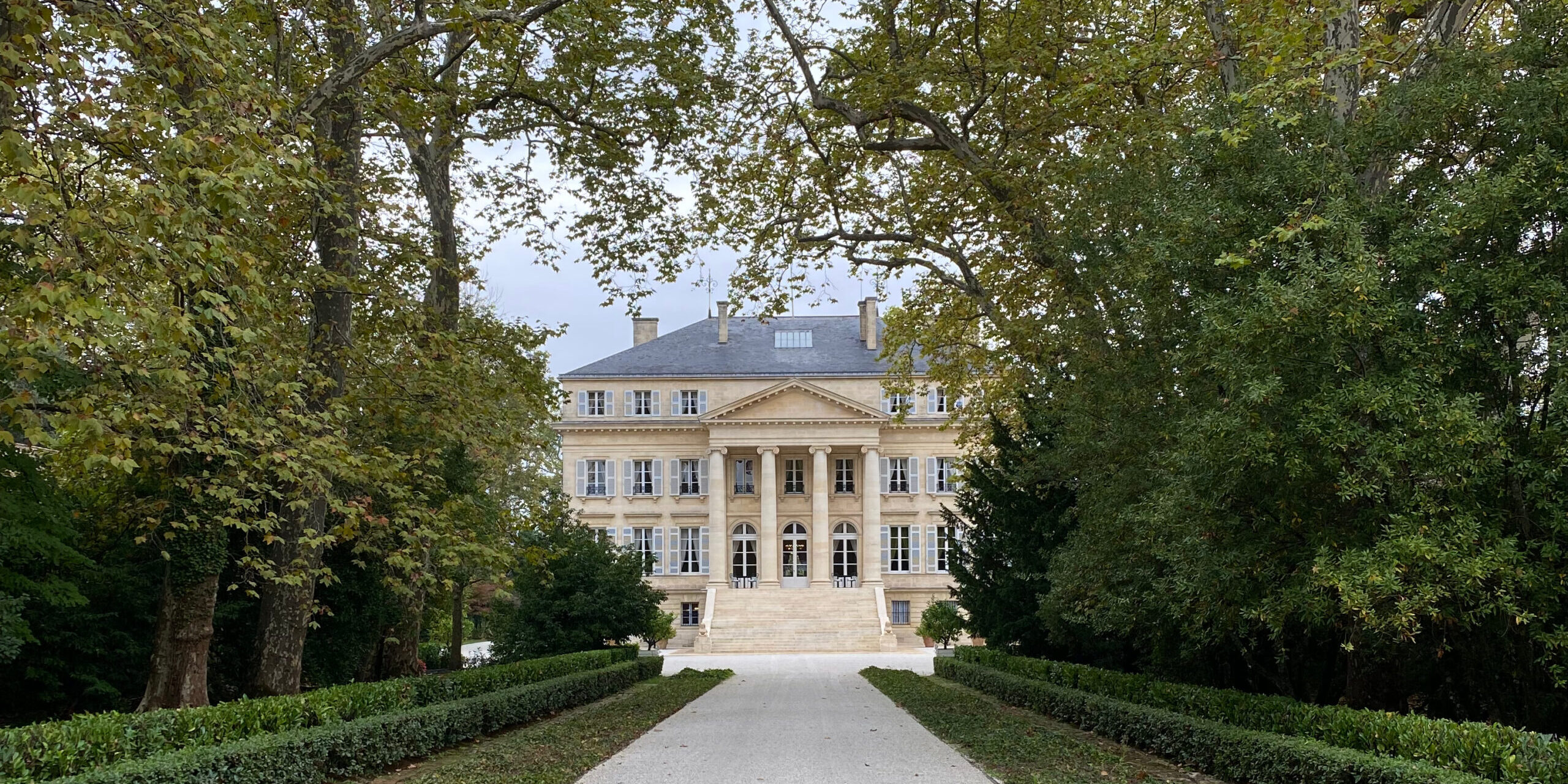 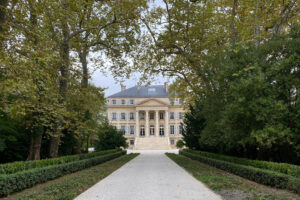 With the 2022 crop picked and in the winery, we visited a handful of Bordeaux’s leading estates to dig into the year. Sophie Thorpe reports on the vintage and its extraordinary potential.

The 2022 vintage may only just have made it into the winery, but it’s already one for the record books. “Unique”, “historic”, “completely new”, “extreme” – the growing season brought never-before-seen conditions to Bordeaux. And producers are clearly excited about the potential of the year.

While 2021 saw a cool, wet year with chaptalization (the addition of sugar to enrich wines) widespread, 2022 was hot and dry. From February onwards, temperatures were consistently above the 30-year average (by 1-3˚C/34-37˚F), while rainfall was consistently lower than the 30-year average. Indeed, Météo France (France’s national weather service) reported that July was the driest since 1959. The weather was so dry that certain appellations were even permitted to irrigate – Pessac-Léognan on the Left Bank, and both Pomerol and Saint-Emilion on the Right.

Pierre-Olivier Clouet (Technical Director at Ch. Cheval Blanc) explained how the region had experienced dry periods before – pointing to 1976 as an example –but never before had they seen practically no rain from budbreak to harvest. This drought, combined with the heat (with four heatwaves bringing temperatures of up to 40˚C/104˚F), was remarkable and made for unprecedented circumstances. He believes that the consistent dryness was key, with the vines having to self-ration from the start of the season to survive. Indeed, the winter was relatively dry, with 200 rather than the normal 400mm. Echoing Clouet’s opinion, Ch. Margaux CEO Philippe Bascaules believes that the dry April and May forced the vines to drive their roots deeper.

Budbreak was early, and – as is now almost the norm – frost struck the region at the start of April, with the mercury on 3rd and 4th April registering as low as -7 or -9˚C/-45 or 48˚F in some places. Noëmie Durantou Reilhac of Ch. l’Eglise-Clinet noted that they only had to use “bougies” (smudge pots) to protect the vines over two weekends, however because the cold weather fell on weekends some people struggled to get workers out into the vines. With their small holdings, the Durantou family could manage it themselves. She also noted that it was a particularly unusual and severe black frost, with tunnels of colder air that caused damage and weakened some vines. Despite this, the Durantou vines escaped unscathed. With investments made and experience gained in recent years, few saw any significant impact – there was a little at Quinault l’Enclos, but none at Cheval Blanc, and the damage at Ch. Margaux wasn’t even worthy of calculating – perhaps 5% on five blocks. 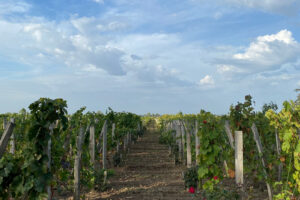 Flowering was even and as was véraison, however Durantou Reilhac reported that the grapes then took a long time to all change color. The leaves started drooping, showing the signs of heat stress towards the end of July. She reacted by doing an early green harvest, so that the vines could focus their energies on a smaller crop – but highlighted it was important this was done early.

At Ch. Margaux, Bascaules noted that younger vines (those under 10 or 15 years old) suffered most – not having the deep roots of more mature plantings. At Cheval Blanc, they noted that it was especially those younger vines on less water-retentive gravel and sandy soils that struggled. With the high temperatures, some producers reported vines shutting down, while others said it wasn’t an issue.

Guillaume Pouthier at Ch. les Carmes Haut-Brion emphasised how the night temperatures were what really set the hot summer apart from a year like 2003. While there were a similar number of days over 35˚C/95˚F, in 2003 there were eight or nine nights with temperatures above 25˚C/77˚F; in 2022, it reached a maximum 20˚C/68˚F in Pessac-Léognan overnight. This significant diurnal shift helped preserve aromatic finesse.

At Carmes, they worked the soil in the evenings to help retain water. To shield the grapes from the sun, they also kept a full canopy, not de-leafing at all, and used a mixture of white clay and talc to protect the grapes, which kept the internal berry temperature as much as five to 10˚C/50˚F lower.

Unsurprisingly given the conditions, harvest was early. Noëmie Durantou Reilhac returned from holiday on 16th August and was almost tempted to pick then. Their team ended up holding off until 31st, while Cheval Blanc started on 29th August, finishing on 20th September. At Carmes, they picked from 5th September to 9th October, while Ch. Margaux picked from September 8th, deciding to do two passes through every block to sort out any shrivelled or sunburnt fruit.

There are two important elements to acknowledge: hail and fire. On June 20th and 21st, there were extraordinary hailstorms – with hailstones the size of golf balls. These were, however, extremely localised and struck mainly lesser vineyards in the Haut-Médoc and Médoc. Next were wildfires that raged through the region in July and August. While the fires didn’t come close enough to cause any damage to vineyards, there were fears over possible smoke taint at certain addresses. So far, however, none has been reported, with the belief that the grapes were early enough in the cycle and still had sufficiently thick skins so as not to be impacted.

In these unique conditions, the New World was a helpful reference point. Philippe Bascaules noted how more and more Bordeaux has to ask the same questions as California does, while Pierre-Olivier Clouet felt that his experience of Malbec in Mendoza was particularly useful. “We were ready to fight with this kind of vintage,” he explained.

“I think it’s going to be a big year for Merlot,” Durantou Reilhac said. “I’ve never tasted Merlot grapes with such power and amazing aromatics.” Almost in spite of the conditions, there’s perfect balance – the hitch, unfortunately, is that there simply wasn’t much of it. 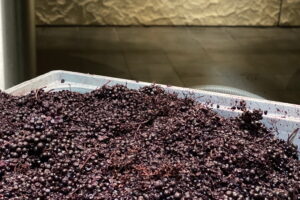 With the hot, dry conditions the crop was small – with tiny, thick-skinned berries. Pouthier at Carmes highlighted just how small they were – with Merlot around 1g versus 1.3-1.4 normally, while Cabernet came in at 0.-0.9g versus the normal 1.2. Carmes’s yields were down about 20%, at around 35 hectoliter per hectare (hl/ha) on average. At Cheval Blanc, they managed 30hl/ha – the same level as 2021, while at Ch. Margaux it was one of the smallest crops for a long time, with a measly 25hl/ha on average (less than 2021, 2020, 2019 or 2018). Yields tended to be more generous on plots with clay subsoils, although Durantou Reilhac found that their vines in Pomerol and Lalande-de-Pomerol suffered more than those in Saint-Emilion and Castillon, with their volumes reduced by at least a third.

Given the small and thick-skinned berries, managing extraction was key. Interestingly Durantou Reilhac found that the berries were so firm that more force was needed to extract the color and tannin. While conventionally seed tannins aren’t desired, she highlighted how remarkable they were this year – popping in the mouth, “noble tannins” with flavours of coffee and toast, and no greenness at all.

It’s almost the opposite at Carmes, where Pouthier believes that – especially in 2022 – their passive extraction via infusion was essential. They lowered the temperature and extended the time (two to five days more than normal, at 25-26˚C versus 30-31˚C). Looking at the numbers, the level of tannins (IPT) is 15% higher than 2018 or 2020 at Carmes. Similarly, Ch. Margaux will be reducing maceration times, looking at 12-18 days rather than 15-24 and keeping temperatures cool at 25-28˚C. The risk, from Bascaules’s view, is to over-extract given the high levels of tannins.

Malic levels are remarkably low this year – the lowest many have ever seen (citing levels as low as just 0.3g/l). At Cheval Blanc, Pierre-Olivier Clouet noted that it was the highest pH they’d ever seen at 3.9. That said, the aromatic maturity is – in his words – “perfect”, with incredibly high levels of tannins that are notably “silky, smooth and ripe”. For Pouthier, the pH is similar to that of 2016 (3.6), even with the low malic levels, and at Ch. Margaux it will similarly be around 3.6-3.7.

Alcohol levels are back up to the new normal from 2021, with Cheval Blanc set to be around 14%, and levels between 14.5 and 15% across the Durantou estates, and similar at Ch. Margaux, where it’s higher than in 2018.Although potential alcohol was sitting at 14.5% at Carmes, a combination of native yeast (which is less efficient at converting sugar to alcohol) and a high percentage of whole-bunch fermentation means the final wine is likely to be closer to 13.3%.

With the uniquely dry, hot conditions, it’s hard to compare the vintage to any other – and it’s like no other year that the Durantou team remembers. Clouet fears that people will be tempted to compare the year to 2003, however it was so different. “The grapes were juicy and full this year, there was no sunburn and the vines didn’t drop all their leaves due to heat stress,” he explained. Indeed, the vines at most addresses still looked green and healthy even in mid-October. He compares it to 2009 for the silkiness and high alcohol, and perhaps 2011 for the high concentration of tannins.

Philippe Bascaules similarly thinks people will compare it to 2003, but for him it’s actually closer to 2018 – with slightly higher alcohol but also higher acidity – or perhaps 2005 and 2010. Guillaume Pouthier feels it’s impossible to compare the wines of modern Bordeaux with any other vintage, for he is part of a new generation focusing on balance and drinkability, as well as complexity and the ability to age.

Tasting the first ferments at Carmes, this is an incredibly exciting vintage. There was no sign of over-ripeness, with incredibly concentrated, vibrant fruit, and even at this infantile stage the significant tannins were silken. The year was far from easy, presenting almost the opposite challenges of 2021, and it remains extremely early to judge. But, as Pierre-Olivier Clouet said, “The wine will tell the story of the year.” And that is quite the story.