How Soil Affects Wine: From Minerality to Acidity 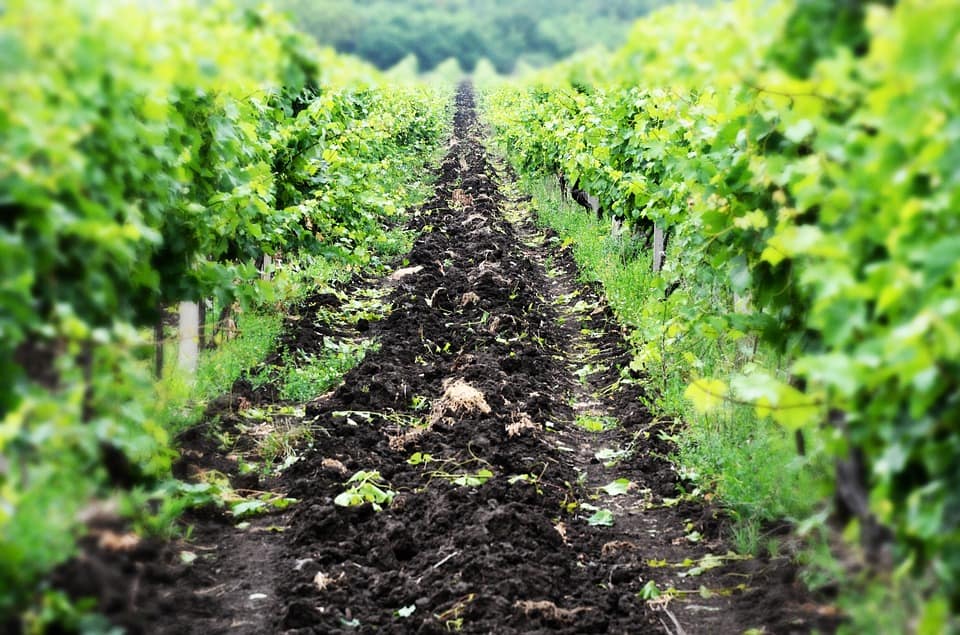 The way that soil affects wine is complicated and not yet well understood by scientists or oenophiles. Photo Credit: MaxPixel CC user Nikon D5100

A few years ago, I had the opportunity to try a 2007 William Fèvre Chablis Valmur at a blind tasting party. What I remember most about this delicious wine wasn’t its fruit or floral notes, but its briny iodine flavor and aroma. The iodine note, in particular, stood out to me because the taste reminds me so much of fine Islay scotch; although the Fèvre is a delicate, complex white Burgundy, I found some subtle similarities between it and my favorite bottle of Laphroaig 18 Year Old. Both share an intense minerality on the palate and an oceanic brininess. In fact, wine critic David Schildknecht says that the 2007 Fèvre is a “mineral soup that seems as deep as the sea.”

But where does Fèvre obtain its strong minerality? For decades, many oenophiles have assumed all great Chablis gets its salinity and oyster shell flavors directly from the soil (grand cru Chablis grapes are grown in Kimmeridgian soil, which contains layers of fossilized seashells). However, as geologists and wine experts study minerality in wine, they’ve discovered that the relationship between soil and wine is much more complicated than this. A wine’s mineral flavors come from more than just rocky terrain and ancient seashells; in order to understand why a wine tastes like wet stones or chalk, you need to know how soil affects wine–and how it doesn’t affect it.

The Relationship Between Soil and Wine Is Complicated

For decades, scientists and wine experts have attempted to understand how soil affects wine, yet despite these efforts, this relationship still isn’t well understood. The main problem that scientists face when studying this relationship is that an almost infinite number of factors can impact wine. It’s difficult to say, for instance, that limestone soil is solely responsible for Mosel Riesling’s firm acidity, lean palate, and intense petrol flavor. While the limestone could have an impact on all of these characteristics, the wine’s acidity, weight, and flavors could also be the result of weather conditions, human interference (both in the vineyard and during fermentation), and post-fermentation practices. In other words, you can’t look at soil composition in isolation from these other viticultural factors that affect wine quality. Soil is just one small piece of a massive jigsaw puzzle.

In order to understand just how much impact soil actually has on the characteristics of wine, it can help to review a few common soil and wine myths. The following myths have been largely disproven by geologists, viticulturists, and chemists over the years:

Geologist Alex Maltman told the Guild of Sommeliers podcast that one of the most common misconceptions he encounters among wine enthusiasts is the idea that terroir is stagnant. For instance, people say that Chablis has Kimmeridgian soil. Although this is true, it ignores the fact that soil composition constantly evolves. The bedrock may contain fossilized seashells, but the younger topsoil often has entirely different properties than the deeper layers. This young topsoil also moves around more than the bedrock does; rain, earthquakes, and human interference may change the overall composition of the topsoil. So while you may attribute the oyster shell flavors in Chablis to Kimmeridgian soil, the limestone-based bedrock isn’t the only type of soil impacting the wine. The ever-changing layer of topsoil also plays a role.

Myth #2: All Limestone Is the Same

Saying that an estate like Raveneau grows its vines in limestone-rich soil doesn’t mean that soil is the same as the limestone-rich soil that exists in other areas of Burgundy. There are many different types of limestone-based soil, and each can affect the final flavor and quality of the wine through different means. For example, soil that is relatively dense tends to retain water and keep the earth cool. This results in a much more acidic wine with a great deal of tartaric acid (this acid makes you salivate and contributes to a wine’s age-worthiness). Meanwhile, if a vineyard has a lighter, rockier limestone-based soil, the resulting wine will usually taste leaner on the palate, and the soil may create more malic acid (this acid can make wine taste too bitter). And this isn’t just the case with limestone. Different types of minerals and soil affect wine in different ways. For example, Mosel has both red and blue slate soils. Although they are both slate-based soils, the red soil is slightly denser and contains more clay, while the blue soil is a bit rockier, allowing for better water drainage and making these wines more concentrated.

Whether a vineyard has volcanic soil, sandstone, or gravel, how soil affects wine will vary depending on how much of each type of mineral is present in the vineyard.

Myth #3: You Can Reliably Correlate Specific Aromas to Specific Soils

Alex Maltman recently studied whether there is a correlation between specific aromatic groups and soil types. What he found is that in blind tastings it’s difficult to pair a specific aroma to its corresponding soil type. In other words, some of the aromas associated with limestone soil, like flintiness or petrol, were also present in wines whose fruit wasn’t grown in limestone. While petrol and limestone aromas are commonly thought to be strongly related to one another, Maltman found that he could identify petrol flavors in wines that were grown in other types of soil as well; petrol wasn’t unique to limestone. This doesn’t mean that soil doesn’t have any impact on a wine’s aroma and flavor. It merely means that each person perceives these aromas differently, and we can’t easily correlate certain aromas with certain types of soil. These connections are still largely a matter of opinion, rather than hard science. While some wine experts like Andrew Jefford have found differences in taste and aroma between wines made in schist versus wines made in limestone, these studies haven’t been reliably repeated yet.

Myth #4: Minerals Have a Smell

Minerals like limestone and sandstone don’t actually have much of an aroma. Instead, we usually detect smells that we associate with stones, rather than detecting the actual aroma of the stones themselves. For example, when you smell wet stones, you’ll perceive the aromas of water, ozone, and small particles of other substances that sit on the surface of the stone (like moss). The stone itself is not producing that aroma. Does this mean that you can never use the word “slate” or “flint” in your tasting notes? Not necessarily. Although we can’t smell the actual differences between these minerals, we can detect small differences in the wine’s other phenolics, which we have learned to associate with either slate or flint.

As you can see, the relationship between soil and wine is a complex and little-studied phenomenon. While scientists, winemakers, and wine critics continue to research this relationship, we still don’t have any definitive answers about the precise impact that soil has on wine, or whether we can really taste flint in a glass of Selbach-Oster Riesling.

Now that we’ve unpacked a few common soil myths, you may be wondering which soil factors actually can influence the flavor of a wine. There are three primary factors that geologist Alex Maltman says directly impact a wine’s flavor the most: water retention, thermal qualities, and microbiology.

From what we know so far about how soil affects wine, the actual minerals themselves may have very little to do with how the wine tastes. Instead, it seems to have more to do with the texture of these minerals and how they interact with water, heat, and bacteria that may impact the final wine.

Soil Can Help You Conceptualize Your Wine

The actual science behind how soil affects wine is complex and far from fully investigated. It’s entirely possible that minerals and soil impact wine flavors in ways that we don’t yet understand. What we do know so far is that soil composition has an impact on how well grapes ripen and how much acidity those grapes will likely have when they’re harvested. Additionally, talking about soil composition can help us contextualize wine, making it easier to discuss the characteristics that we love. For instance, even if I know that limestone doesn’t directly absorb into a grapevine’s roots, I can still use the word “limestone” to talk about the unique characteristics of Chablis in my tasting notes. In this sense, limestone becomes shorthand for Chablis’ unique flavors, like salinity and chalkiness. Ultimately, tasting minerality in a wine is entirely subjective. If you feel that soil and minerality help you understand a region’s wines more easily, then you can and should use these terms in your own tasting notes.

Your 2019 Burgundy Vintage Report: A Year of Concentrated Yet Balanced Wines
November 21, 2019
Go to Top