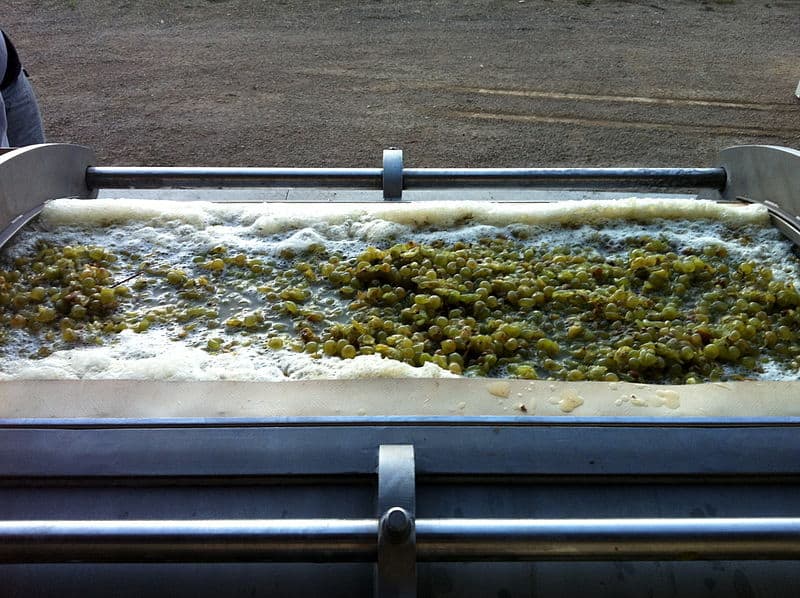 Making Chardonnay is usually a delicate process that requires a gentle hand–you have to carefully sort the fragile fruit into a nearly-airtight grape press, then slowly squeeze each cluster just enough to let the juice run out. But modern wineries are beginning to embrace a darker, more brutal style of wine, called “black Chardonnay.” Rather than handling their grapes gently, winemakers make black Chardonnay by mashing the grapes together quickly and violently, exposing the juice to as much oxygen as possible. Although this process seems unrefined, it serves a greater purpose: to prevent premature wine oxidation. By promoting oxidation in winemaking from the start, wineries claim that their wines are better equipped to fend off premox later in life. Now that we’ve watched this winemaking trend become more popular, let’s talk about how to invest in black Chardonnay, and whether these wines have the same aging potential as their peers.

How Oxidation in Winemaking Fights Premox

Encouraging oxidation in order to prevent premox seems like it would simply make the problem worse. However, early oxidation in winemaking could actually immunize the wine against premox as it ages. According to a 1998 study, hyperoxidation of grape must during the pressing stage leads to more resistance against oxidation as the wine ages in the bottle. That’s because the phenols in grape skins tend to absorb more oxygen than any other compound in the wine. When winemakers smash the Chardonnay grapes together, the grape skins release more phenols, which absorb oxygen until they turn black or deep brown in color. As the must sits in the press, these dark, solid phenols precipitate and separate from the rest of the juice. By the end of the pressing, winemakers are left with a golden yellow juice that has fewer unoxidized phenols than traditionally-pressed Chardonnay.

This means that black Chardonnay might be less likely to face premox later in life. With fewer unoxidized phenols left in the juice, the wine can’t absorb as much oxygen as it ages. Moreover, this early phenol oxidation doesn’t negatively impact the flavor or even the color of the wine after it’s bottled. When the solid phenols separate from the rest of the wine, they take their black, oxidized pigment with them. The severe oxidation also tones down the normally bitter flavor of the grape skins and seeds. However, in order to achieve this light color and sweet flavor from black Chardonnay, winemakers need to allow the must to turn as dark as possible before filtering out the solids. If they don’t take the oxidation far enough, the wine will still be susceptible to premox.

Because premature oxidation in wines has reached plague-like levels in Burgundy over the past 20 years, some wineries have decided to avoid oxygen exposure entirely when they make their wines. Many Burgundy estates will add sulfur to their juice after the grapes are pressed in an airtight container. Although this does stave off oxidation early on, it also makes wines that smell like lit matches or boiled eggs. This scent used to be a sign of a serious wine fault, but because so many Burgundian wines now use sulfur to combat premox, it’s become an accepted part of the white Burgundy drinking experience. In theory, if Burgundy winemakers begin embracing black Chardonnay and oxidation in winemaking, we could see fewer bottles of “matchstick” wine over the next few decades. Time will tell whether oxidation in winemaking will be fully embraced by the industry, or whether it will remain a niche, experimental technique.

How to Invest in Black Chardonnay

Experts still aren’t certain whether letting the grape must oxidize is a foolproof solution to the premox problem. Yet studies on black Chardonnay bottles made as early as 1965 show that these wines tend to fare better than their peers, and could bring back the clean, classic white Burgundy taste that many collectors have been missing since the premox epidemic began. In fact, some experts theorize that the iconic 1973 Chateau Montelena Chardonnay was actually a black Chardonnay. The 1973 vintage had originally turned a deep brown color early in its development, which worried its winemakers. By the time the wine was bottled and aged, however, the brown hue dissipated and was replaced with a rich golden color. Today, it’s among the estate’s most collectible wines, and has aged gracefully.

This vintage could be one of the earliest examples of how oxidation in winemaking can result in a longer-lasting, higher-quality wine. If you want to invest in black Chardonnay or other wines that use oxidation early in the winemaking process, consider the following Burgundy estates: Bernard Moreau, Roulot, Boisson-Vadot, Pierre-Yves Colin Morey, Bruno Clair, and Coche-Dury. Each of these estates allows some oxidation in the early pressing stages of their grapes, and so far, the results have been promising. For instance, critics who have tasted Coche-Dury’s Blanc vintages find them more concentrated and complex than typical white Burgundy, and their aging potential is impressive–most vintages drink well even after 20 years in a cellar. What this means for your collection is that black Chardonnay and other “open-pressed” wines have enough lasting power to be worth cellaring long-term. If you’ve been skittish about buying white Burgundy over the past few years, investing in more black Chardonnay could be a safe alternative to more typical sulfur-heavy vintages.

Whether you are starting your high-end wine collection or adding to an established portfolio, Vinfolio is your partner in buying, selling, and professional storage. We carry excellent investment wines from the best vineyards in Burgundy and across the globe. Contact us today to get access to the world’s finest wine.