Wildfires in California Wine Country: What Collectors Need to Know About the 2017 Fires 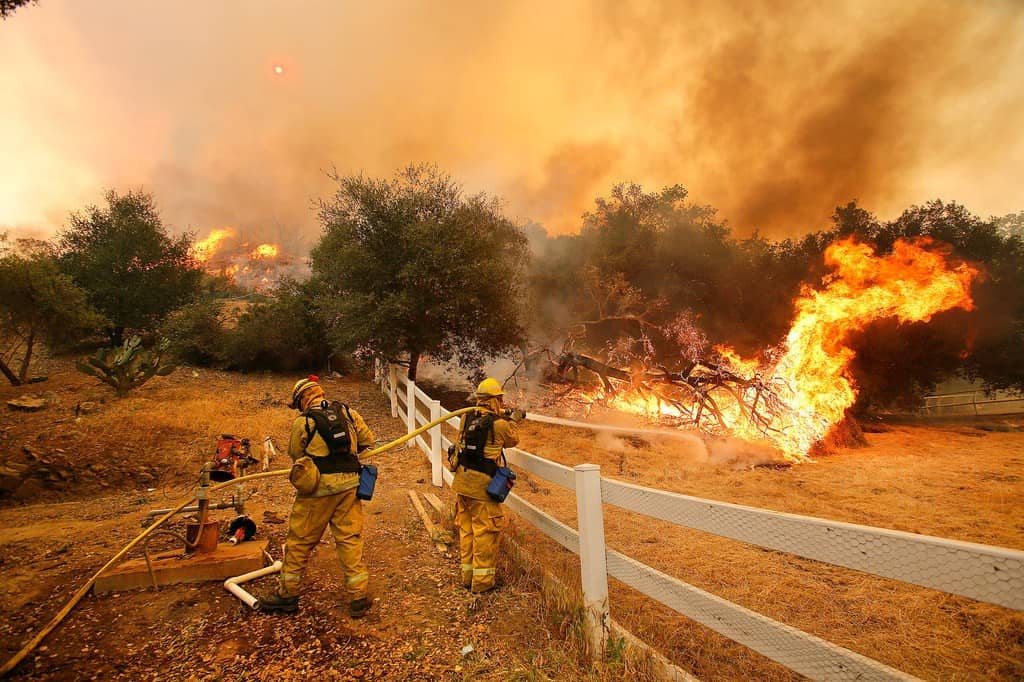 This July, a massive wildfire scorched through hectares of riverbeds and grapevines along the edge of North Canyon Vineyard in southern California. Winemakers at the neighboring Bien Nacido Vineyards feared that the fire would make its way to their vines as well, putting their famously high-quality grapes at risk. Bien Nacido is best-known for growing grapes for esteemed producers like Sine Qua Non, Ojai, and Jonata, all of whom rely on Bien Nacido’s aged vines and ideal weather to craft some of the best vintages in the world. Although the vineyard narrowly escaped the worst of the wildfires in California wine country, other winemakers haven’t been as lucky. Wineries that have been unsuccessful in their efforts to keep the fires away from their vines might be forced to increase prices for the 2017 vintage, and the damage could continue to impact these vineyards for years to come. Here’s why, and what you can expect from wines from these areas.

On average, California experiences 3,491 fires per year covering 129,404 acres. This year, the number of wildfires has climbed to 4,398 since January, damaging a massive 223,526 acres–and the year’s not over. This number is expected to increase even further over the next few months. The increase in wildfires in California wine country is likely the result of unusually dry, hot weather this year. June reached record-high temperatures, and these continued well into July in many areas, causing small brush fires to spread more quickly. This is part of global warming’s impact, and the wine industry will increasingly see its effects. Experts suspect that an increase in wildfires will become the new norm for California as climate change causes global temperatures to rise, and rainfall continues to decrease during the summer months. While firefighters and winemakers were able to take precautions to reduce the damage this year, in the future, if wildfires in California wine country become more common, it could become harder to contain every fire.

The Effects of Fire on Vines and Vineyards

The most recent wildfires in California wine country got within just 50 feet of the vines at Bien Nacido, and winery staff and firefighters were barely able to hold the fires off, even with a full-time night crew cutting fire lines around the entire perimeter. The biggest risk for winemakers dealing with an approaching wildfire is, first and foremost, the damage that fire and excessive heat can do to the vines themselves. A fire will quickly burn through a vineyard in particular because the vines are usually kept relatively dry during the summer in order to promote ripe, concentrated grape growth. Once the vines are burned, winemakers might have to replant the vines altogether, or remove and destroy scorched grapes and leaves.

But wildfires in California wine country can cause a cascade of damage across the entire winery that extends beyond the immediate damage to the vines themselves. For instance, if a winery has a large number of ancient vines, replanting those vines could negatively impact the winery for decades. It takes years for a vine to become mature enough to produce grapes, and decades more for those vines to produce the uniquely high-quality grapes that can only be grown on old vines. By losing their old vines, a vineyard could also lose out on valuable growing contracts with top producers. Additionally, even if the fires never touch the vines, the resulting smoke can alter the flavor of the wine produced that year. Winemaker Jean-Pierre Wolff says that smoke particles and ash cling to the skin of the grapes, and when it comes time to press them, the particles often end up in the final wine, imparting a bitter charcoal flavor.

Overall, wildfires in California wine country could make the wine growing process far more expensive and time-consuming for vineyard managers, which in turn will impact the price of wine in the future. In response to the 2017 fires, winemakers have already had to hire more staff to work in the vineyard 24 hours a day just to keep the fires contained. This crew has to create fire lines in the ground and be on constant watch for approaching fires, in addition to maintaining the vines as usual.

However, even if a vineyard takes every precaution available to them, they could still lose out on valuable contracts with producers who don’t want to take a risk. A producer might favor a different vineyard over the one they usually use simply because that vineyard wasn’t close to any wildfires over the course of the summer. In turn, these vineyards could charge more for their grapes, forcing the top producers to pay a greater premium for undamaged grapes.

What this means for your collection is that it’s possible you could see a slight spike in price for California wines, particularly in areas impacted by wildfires, or among producers who buy their grapes under contract. Right now, we still aren’t sure just how much the price of wine could increase, but we should know more after the 2017 harvest season ends. Additionally, you might notice an increase in price for wine made from old vines in particular, especially if wildfires cause significant damage to these types of vines over the next few years. Finally, you’ll want to pay close attention to this year’s tasting notes in regions that were impacted by wildfires. Some wines may have noticeable smoke damage, so you’ll want to watch out for bitter flavors or notes of charcoal in the 2017 vintage. Overall, the 2017 California vintage is shaping up to be a great addition to your cellar, but as fires in the California area continue to increase every summer, collectors will need to take more and more caution when investing in wines from wildfire-prone areas.

Whether you are starting your high-end wine collection or adding to an established portfolio, Vinfolio is your partner in buying, selling, and professional storage. We carry excellent investment wines from the best vineyards in California and across the globe. Contact us today to get access to the world’s finest wine.

How to Find the Perfect Super Tuscan Food Pairing
October 16, 2020

Your Guide to the Best Wine from Saint-Émilion
July 31, 2020
Go to Top