Hidden Gem of the Month: Why a 2001 Yquem Investment Is a Foolproof Choice 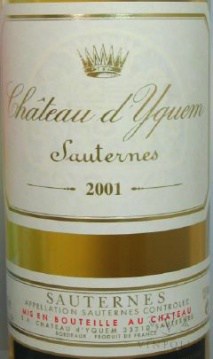 A 2001 Yquem investment could be perfect for your cellar if you have time to wait for this legendary wine to mature.

Chateau d’Yquem’s 2001 vintage nearly breaks our rating system. It’s one of those rare wines that already tastes perfect in its youth, and only seems to get remarkably better as the years wear on. Many critics who have tried this wine aren’t even sure whether a perfect, 100-point score accurately describes it–somehow, it feels like 100 points is still too low. Because of this vintage’s flawless reputation and extremely long aging potential, a 2001 Yquem investment could be the most important purchase you make this year. Even 16 years into its lifespan, 2001 Yquem shows no signs of dullness or mature fruit flavors; it tastes just as vibrant today as it did the day it was bottled, which bodes well for its ageability in the future.

A Yquem vintage earning a perfect score among most critics isn’t something new. This estate has dozens of “perfect” wines in its history, and you’ll only find a handful of truly mediocre vintages from the past. However, what makes a 2001 Yquem investment so much more worthwhile compared to many of the estate’s other perfect wines is that it’s barely showing a hint of age, even now. Typically, the best vintages from Yquem begin to change in personality about 10 years after bottling. Take the near-perfect 2007 vintage, for instance. While this vintage was youthful and vibrant in its early years, it had already started to take on some weight just five years after bottling. Sweet Sauternes tends to become more dense, dark, and rich as time goes on, making these wines excellent investments for collectors who don’t want to wait decades for a wine to fully mature.

But the 2001 Yquem isn’t meant for this type of collector. Yes, the 2001 tastes complex and thick right now, like all Sauternes, yet you won’t see its true unctuous potential until at least 2020. Moreover, critics expect this wine to remain drinkable beyond the year 2100; when you make a 2001 Yquem investment, you could easily commit to owning this bottle for the rest of your life, and even pass it down to your children and grandchildren. This is an heirloom wine that will slowly increase in value with every passing decade, much like Yquem’s legendary vintages from 1811 and 1847.

What Makes This Vintage So Great?

Age-worthiness isn’t the only reason you should consider investing in 2001 Yquem–the wine also tastes like “liquid gold.” Managing Director Pierre Lurton said that the weather conditions in Sauternes were ideal that year, with consistently warm weather that made the grapes ripe and healthy enough to take on noble rot later in the season. The sugar concentration was especially high in 2001, and normally, this would result in a vintage that feels a little too rich. However, Yquem’s winemakers say that this vintage had a massive 4.5 grams of sulfuric acid per liter, meaning that the intense concentration of sugar was well balanced with plenty of biting acidity. These acidity levels are higher than they were in the similar 2003, 2005, and 2011 vintages, and as a result, the 2001 feels less weighty overall, even with its intense concentration of flavors.

Comparing a 2001 Yquem Investment to Other “Perfect” Vintages

The 2001 is undoubtedly enjoyable to drink, but how much profit can you stand to make from a 2001 Yquem compared to the estate’s other fine vintages? When this vintage was first released in 2005, it sold on the secondary market for about $390 per bottle, and today, these bottles go for nearly $600 each. By comparison, 1999 Yquem, which received an average score of about 92, sold for just $130 per bottle. Having that perfect 100-point score has made 2001 Yquem more expensive than most other wines sold on the estate, however, this means you could also make a greater profit from these bottles later. For instance, 1975 Yquem received similarly high praise in its youth, and today, these bottles sell for about $900 apiece. Critics say that the 2001 is of even higher quality than the 1975, so in theory, you could resell a bottle that you buy today for nearly double the price in the next 20 years.

To really make the most out of your 2001 Yquem investment, you might consider buying a few bottles today, drinking some of them over the years (and making sure to take great tasting notes of the wine as you try it) and keeping at least one or two bottles as long-term inheritance pieces. You might even want to lay down this wine for a special occasion–this would make a great birth year wine for a child’s graduation from college or a special anniversary gift. Or, if you’re an especially young collector, buying the 2001 vintage now and keeping it under professional storage for the next 50 years or so could earn you a significant profit. Perfect Yquem wines that are more than 50 years old can sell for as much as $4,500 per bottle, and there’s little doubt that the 2001 vintage will be among one of these legendary, valuable wines. Even if you can’t wait 50 years for this wine to mature in your lifetime, you can still enjoy the luscious, darkened fruit flavors of this Yquem vintage in as little as 10 years from now. Drinking a mature, perfect Yquem is an utterly unique tasting experience that should be on every collector’s bucket list.