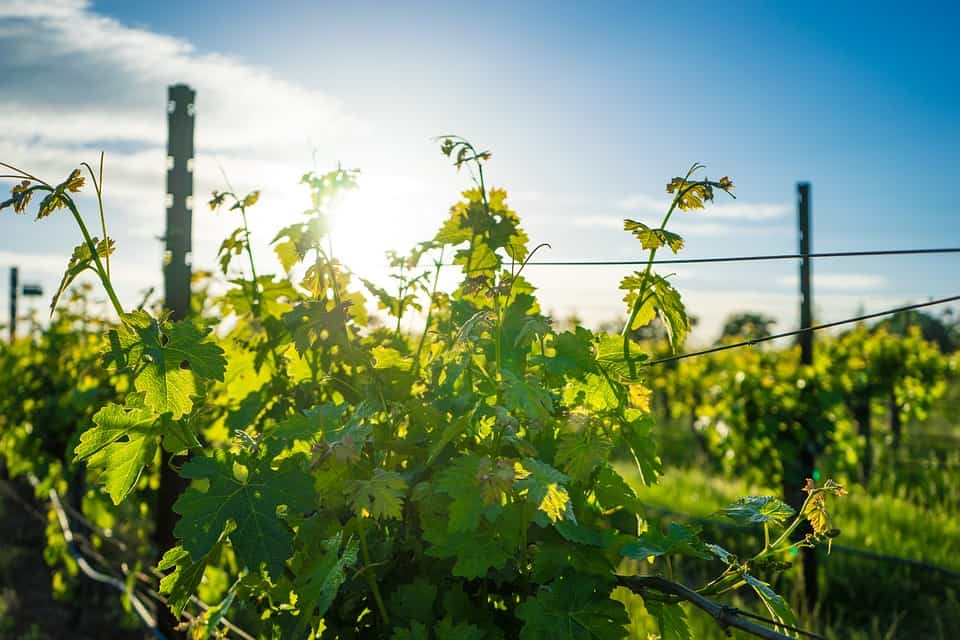 So far, global warming’s impact on the wine industry has been to cause increased canopy growth, which could result in lower fruit yields. Photo Credit: Pixabay CC user bedrck

Earlier this year, Hourglass had a close call with a handful of pine trees in their vineyard. Months of unusually heavy rain in the late winter caused massive flooding in the vineyard, which caused several 150-foot pine trees to rip right out of the ground. Vineyard proprietor Jeff Smith told Forbes that watching these giants fall was “a sight to see!” Thankfully, the downed trees only damaged a small number of vine rows, and the vast majority of the early buds survived.

Although this story has a happy ending, climate change experts worry that incidents like this will become more common. Global warming’s impact on the wine industry could lead to more years of heavy rain and flooding, which will affect both grape growth and wine prices in the future. In California and Mediterranean regions like Tuscany, climate change is already affecting how the vines grow, leading to lower grape yields overall. Climate change has also led to an increase in manual labor at wineries that are trying to control their rapid, unwieldy canopy growth. These two factors could significantly inflate the price of fine wine in the near future, especially in traditionally warm, dry climates.

You might assume that a global increase in temperature will lead to less rain in the future, not more. However, this isn’t entirely true. Climate change experts studying global warming’s impact on the wine industry have found that regions like California still experience severe drought conditions during the summer, which is leading some wineries to experiment with methods like dry farming wine, but in the late winter and early spring the state gets more rainfall than ever. As temperatures rise throughout the year, winters also get slightly warmer. In areas that used to have snowfall, temperatures are too warm for water to freeze, resulting in heavy winter rain storms instead. In addition, any snow that does fall tends to melt earlier than usual in the season, which leads to flooding.

This causes a number of problems for wineries. The impact of global warming trends on the wine industry includes:

Heavy rains early in the season, followed by bouts of sunshine, tend to trigger extensive leaf growth in vines. If the canopy gets too large, it can block out the sun from the budding fruit, resulting in lower yields overall. Even if the grapes survive this stage, heavy rains can also cause flooding, downed trees, fruit molding, and spring sickness (root rot). This rainfall usually stops entirely by the beginning of the summer, which then causes even more issues for the grapes; by the time harvest season arrives, many berries struggle to retain enough acidity to make balanced, refined wines.

In response to increased canopy growth and risk of root rot or molding, many wineries in California and European Mediterranean regions have been forced to hire more workers to tend to the vines. Skilled manual labor is required to prune back the canopy and cut off molding portions of the vine. Although this extended labor force is essential for the health of the vineyard, it’s also more expensive for wineries to maintain. In this sense, global warming’s impact on the wine industry will not only affect how many grapes a winery produces every year, but how much it costs to grow those grapes as well. Low yields, coupled with a more expensive workforce, could mean much higher wine prices in the future for the consumer.

What’s more, increased temperatures in the summer also result in less productivity for a winery’s workforce. One study found that wineries experience a 27 percent loss in labor productivity as summer temperatures rise. On average, workers are able to spend 15 percent less time out in the sun pruning back the canopy or harvesting grapes. And when workers are out in the heat, these high temperatures make it difficult to perform manual labor. The bottom line is that a worker’s cardiovascular system doesn’t work as efficiently in 95-degree weather as it does in 75-degree weather, meaning their movements slow down as the temperatures rise. The risk of serious health problems, like dehydration or heat stroke, also become more common with rising temperatures. In some regions, these dangerous health risks have led to labor shortages, which means that wineries must produce even fewer grapes, as they don’t have enough staff to maintain the vines properly.

What This Means for Your Wine Investments

Only time will tell whether this trend of heavy winter rainfall and summer droughts will remain a problem in the future. If global warming’s impact on the wine industry continues, we can expect to see California and Mediterranean wines become somewhat rarer on the market, since grape yields will likely decrease. This alone could increase the value of these wines on the market. Coupled with a more expensive and possibly dwindling workforce, wineries might have to charge even more than usual for their bottles. This won’t necessarily be a disaster for your collection; the world’s most collectible wines from these traditionally warm areas, like Screaming Eagle or Ornellaia, will still remain collectible, and could even increase in secondary market value as they become more scarce than they already are.

However, for small-scale growers, global warming’s impact on the wine industry could be a serious problem. These estates often aren’t large enough to make it through a few lean years, and it’s possible that we could see some of these small estates disappear entirely. For the majority of producers, though, a small price increase will likely be enough to keep them going, meaning that your collection should survive these major changes in the weather–even if it means you pay a little more upfront for your wine.