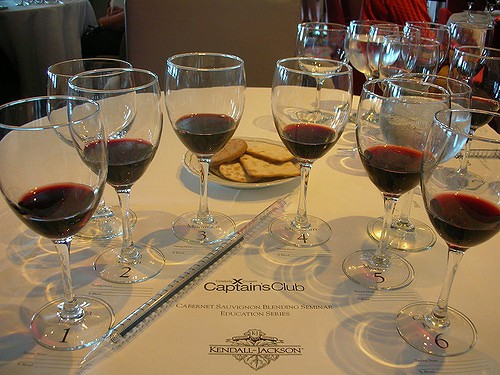 Hosting your own DIY wine blending session teaches you which blends you prefer, making it easier to find wines that will appeal to you in the future. Photo Credit: Flickr CC user Tom Mascardo

The Washington Post’s Kristen Hartke was a self-proclaimed “wine consumer, not a connoisseur.” She didn’t have an in-depth knowledge of the winemaking process–she didn’t even know which grapes make up the perfect bottle of Chateauneuf du Pape. However, all of this changed when Hartke attended her first DIY wine blending class. The hands-on nature of this process allowed her to see and, most importantly, taste the subtle differences between wine blends. By the end of the class, she could decide whether a wine needed more or less of a certain varietal, much like a skilled chef knows whether a dish needs more oregano.

By hosting your own DIY wine blending session like the one that Hartke attended, you’ll grow more connected to your own palate. In the future, this could make the wine shopping experience a faster and more refined process because you’ll know exactly what you’re looking for on any wine label. Here’s how to do it.

How to Use DIY Wine Blending

Your goal with any DIY wine blending session is to first understand which varietals make up the most popular wine blends on the market. You can do this by trying to copy the blends of a few highly-rated producers, then finding out what makes these wines “tick.” Beyond this basic understanding, however, you’ll want to dive deeper into the process, learning which precise ratio of varietals tastes the most refined to you.

This is highly subjective, and the results might surprise you. You might discover that you don’t actually like the taste of Clos des Papes’ Grenache-heavy blends, but instead, you far prefer Clos St. Jean’s blends, which are more Mourvedre-heavy (or vice-versa). Before you embark on your DIY wine blending session, commit to being honest with yourself about the flavors you actually love. For instance, after attending two wine blending classes myself, I quickly learned that I prefer my jammy red California wines to have at least 25 percent Petite Sirah in the blend. Petite Sirah adds a healthy dose of spice, which counteracts some of the naturally fruit-forward flavors.

To organize your own DIY wine blending session, start by making a list of at least three popular wine blends that you want to mimic. Preferably, choose blends that already have the percentages listed under the tasting notes so that you know exactly how much of each varietal you need to mix into your own blend. A great example of this is Dalla Valle Maya–most vintages list an exact ratio of Cabernet Sauvignon to Cabernet Franc. Once you have your wine list, look for varietal wines made from 100 percent of each of the grapes you need. It’s important to pick varietal wines that are all about equal in quality (with about the same average critic score), or that come from the same producer. They should also all come from the same vintage. An underripe Cabernet wine made during a difficult vintage might negatively impact the flavors of your blend.

To blend your wine, use a steel measuring cup to add the precise ratio of each grape varietal into a decanter. Swirl the blend around in the decanter, pour it into a glass, then sample your new blend. How does it compare to the original? Your blend won’t taste exactly like the wine it mimics, but the two wines should at least taste similar enough to be “cousins.” From here, experiment with your blend, adding more or less of each varietal involved. Sample your blends and note the differences you taste, deciding which versions you preferred, and which were less appealing.

If you’re stumped on where to start with your DIY wine blending session, I recommend mixing your own Chateauneuf du Pape, California red wine blend, and white Bordeaux blend. These blends are relatively easy to mix on your own, and they’ll teach you a great deal about the iconic styles of each region.

Here are three producers that you should try to mimic, along with some blend ratios:

Varietals you need: Grenache (for fruitiness), Mourvedre (for savory notes), Syrah (for spice), and Counoise (for acidity).

Varietals you need: Sauvignon Blanc (for citrus flavors) and Semillon (for richness and creaminess).

When you try this yourself, keep in mind that some of the blends above won’t taste refined, since they’re extreme examples of mixing. However, the goal of these five example blends is to teach you what each varietal in the blend does so that you’ll know what the blend you’ve created is missing (or has too much of). In the future, you’ll be able to better identify wines during blind tastings, you’ll be able to look at a wine label to decide whether a wine has too much of a particular grape to appeal to you, and you can use what you know about blends to write more informative tasting notes.

What Assets To Buy During a Recession: Consider Fine Wine | Vinfolio
October 18, 2022
Go to Top