Hidden Gem of the Month: 2010 Montrose Is One of the Most Collectible Bordeaux Blends from This Estate 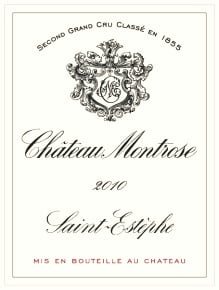 High tannin and concentrated fruit will allow 2010 Montrose to age for another 80 years.

When I originally looked into some of the latest releases from Montrose, I assumed that the 2009 was more collectible than the 2010. After all, the 2009 costs about $100 more per bottle than the 2010. But after digging through numerous tasting notes and looking at the aging potential for 2010 Montrose, I’ve found that this vintage might actually be the superior choice for collectors seeking the best Bordeaux blends for their cellars. In my opinion, the current price doesn’t match the supreme quality you’ll get from this long-lasting wine. If you’re looking for a 100-point wine for the price of a 95-point wine, consider buying your own bottle of 2010 Montrose.

The Drama Behind Becoming a Collectible Bordeaux Blend

Robert Parker can make or break a wine with just a single rating. This fact was never more evident than with 2010 Montrose. When Parker first tried the estate’s earlier vintage, 2009 Montrose, he gave the wine a perfect score, which significantly increased its value on the secondary market. However, one year later, when he tried the 2010, he gave the new vintage a slightly lower score: 99 points. That one point made all the difference; the 100-point 2009 was worth about $350 per bottle, while the 99-point 2010 was worth just $230 per bottle. At the time, wine journalist Dr. Vino thought it was odd that Parker rated the 2010 Montrose lower than the 2009. That’s because the 2010 Bordeaux bottles that Dr. Vino tried were usually better tasting than the 2009s.

It turns out that Dr. Vino was onto something. Years after that first 99-point review, Parker revisited 2010 Montrose and changed his original score. The 2010 Montrose went from a nearly perfect 99 rating to a perfect 100-point vintage. Parker says in his updated review, “This is considered to be among the greatest vintages ever made in Montrose.” What this means for your cellar is that both the 2010 and 2009 now have perfect scores that are worthy of any connoisseur’s portfolio, but the 2010 is still cheaper up-front. You’ll get the same quality as the 2009 without having to pay the slightly inflated asking price.

Among the Longest-Lived Bordeaux Blends

Although Montrose is classified as a Second Growth estate in Bordeaux, collectors still flock to these wines. I’ve known collectors who will only buy First Growth wines, but even they will make an exception for Montrose. That’s because Montrose crafts some of the longest-lived bottles in the world. The estate earned the title “Super Second Growth” because many of its wines are able to hold their own against First Growth peers, and in some cases, are even able to surpass First Growth quality in certain vintages. However, the winemakers make long-term aging their priority, and as a result, these wines rarely drink well in their youth. If you’re going to invest in Montrose, be prepared to sit on your bottles for at least 20 or 30 years, preferably more.

The 2010 Montrose is expected to age through 2100, as long as it’s kept under the right storage conditions. I recommend trying professional storage for this bottle. Its blend of 53 percent Cabernet Sauvignon, 37 percent Merlot, 9 percent Cabernet Franc, and 1 percent Petit Verdot was aged in 60 percent new oak barrels for 18 months. This prolonged oak aging is partially what gives the wine its long-lasting quality. The 2010 in particular is packed with dense flavors, owing to the turbulent weather that year. A massive summer drought intensified the juice, while a cool August injected the grapes with bracing acidity. The result is a masculine, robust wine that’s hard to tame in its youth, but that has enough tannin to take it well beyond its 50th birthday.

You can’t talk about 2010 Montrose without comparing it to the 2009; both were the finest vintages Bordeaux has seen in decades. Whether you invest in the 2010 or the 2009 depends on your taste preferences and how much patience you have. One of my friends personally prefers the 2009 vintage because he likes fruit-forward, velvety, approachable wines. At 56-years-old, he also doesn’t like to wait 30 years for a wine to mature. If this sounds like you, then the 2009 Montrose might be the better investment choice, even if it means paying slightly more per bottle. These wines aren’t as age-worthy as the 2010, but they drink well in their youth and have a fruitier flavor profile.

However, I personally prefer the 2010 Montrose to the 2009. To start, since I am a relatively young wine enthusiast, I’m willing to wait decades for my wine to reach maturity–I’m in no hurry to drink my age-worthy bottles. The 2010 also offers better value up-front. You can buy a case of 2010 for about $2,760, whereas a case of 2009 will cost almost twice as much. As the bottles age, they’re expected to grow significantly in value, making the 2010 an ideal choice for investment-focused collectors. Finally, you’ll want to buy 2010 Montrose if you prefer a classically-made Bordeaux blend. This vintage ignores the fruit-forward wine trend, taking on darker, earthier flavors. It won’t necessarily charm you as a teenager, but when it reaches its peak, we promise it will give you goosebumps.