Hidden Gem of the Month: 2007 Sea Smoke Ten Is a Powerful and Elegant Pinot Noir 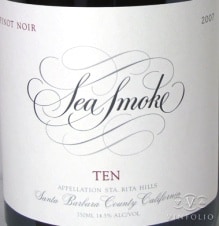 2007 Sea Smoke Ten is an unusually intense Pinot Noir with enough acidity and firm tannins to last decades in a cellar.

Coming out of a year with shoddy weather conditions and tired vines, 2007 Sea Smoke Ten is an unlikely success story. Now that this wine has had about 10 years to age, it has transformed from a slightly awkward duckling into an elegant swan worthy of a space in any Pinot Noir lover’s cellar. Yet you shouldn’t let its elegance fool you–this is a Pinot Noir that can knock the wind out of you. Years ago, I was in the midst of a California Cabernet Sauvignon obsession (Shafer was a big favorite), and Sea Smoke was one of the first wines to break me out of my Cabernet rut. It has all of the richness and intensity of a big Cab, but with a stronger sense of refinement.

A Rebel At Heart

I usually expect a Pinot Noir to feel light as air on the palate, with subtle fruit and supple tannins. In this sense, 2007 Sea Smoke Ten is a true rebel. Many of Sea Smoke’s wines grip the tongue with intense fruit and firm tannins, and it’s exactly this quality that makes them age-worthy. In fact, the 2007 vintage has only recently grown into its enormous flavors; it tastes better today than it did in its youth, and will likely continue to age beautifully the longer you wait. Wine Enthusiast gave the wine a high score in 2010, but the critic noted that the astringent quality of the wine completely overpowered its subtle red fruit character, saying, “This enormous wine demands time.” Now that it’s been given the chance to settle for a while, the tannins have softened and the acidity is better incorporated in the blend, allowing delicate flavors like Indian spices and even rosehip tea to shine through.

Surprising Intensity for the Season

The 2007 Sea Smoke Ten isn’t just unusual for a Pinot Noir, it’s unusual for its vintage. In general, 2007 wasn’t an easy year for Santa Barbara’s winemakers. The vines were already exhausted from two previous years of unusually high yields. In both 2005 and 2006, berries were huge, and they clung to the vines late into the fall. By 2007, winemakers were worried that the vines were becoming overly stressed from the excess fruit production, and their predictions turned out to be correct. That year, a frigid, bone dry winter shut the vines down well into the spring season, contributing to late bud break and low yields. The remaining grapes ripened slowly and consistently, however, some winemakers struggled to make a wine with intense flavor. Cool temperatures increased acidity at the expense of fruit-driven notes.

This was not so for 2007 Sea Smoke Ten. That’s because this estate tends to babysit its grapes, going through a careful destemming and pressing process to bring out as much fruit (and as little bitterness) as possible. In 2007, the estate used lower pressure than usual to press the grapes so that they could extract the sweet notes from the juice without accidentally crushing the bitter seeds inside. The result is a wine with plenty of natural acidity from the cool weather, but that retains a light, fruity finish. Sea Smoke tends to produce wines of consistent quality no matter what the weather is like because they rely on individual fermentation of different vineyard plots. The Ten label is made from ten different Pinot Noir clones, vinified separately and blended together based on the results. In 2007, winemakers included plenty of fruit-driven, intense clones to make up for the very high acidity.

When you buy 2007 Sea Smoke Ten, you’ll get a wine that will last at least another 10 years in a cellar, if not longer, but personally, I would drink this wine within the next five years to get the best out of it. The youthful fruit will be at its most compelling before the mature, earthy flavors take over entirely, yet the wine has already had enough time to mellow out and reach full sophistication. You should also know that the 2007 is one of the last vintages produced by Kris Curran for the estate. She is famous for her ultra-ripe, concentrated wines that have a strong punch of new oak. Since 2008, her replacement, Don Schroeder, has turned away from oaky, concentrated wines in favor of a lighter Pinot Noir. Both styles are delicious, but if you’re looking to invest in an intense wine, you’ll find exactly that in Curran’s past vintages.

Alternatively, the 2012 Sea Smoke Southing is a modern version of the 2007, but with slightly less oak and acidity. If you’ve always wanted to invest in Sea Smoke wines, the 2007 and 2012 vintages are the first bottles I would suggest, since both have the power to age for decades coupled with the refinement that you’ve come to expect from Pinot Noir masters.