Tasting Wine by Moon Phases: Do Lunar Cycles Change the Flavor of Wine? 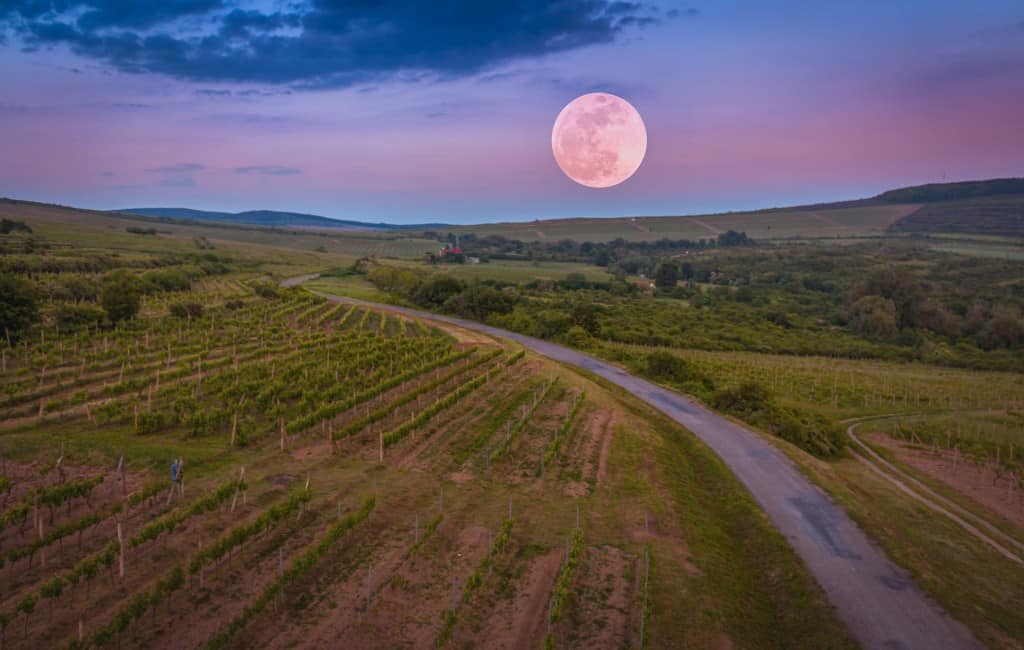 You’ve likely heard of biodynamic winemakers racking the lees under the light of a full moon, believing that the clarity of the moonlight will also make the wine clearer. Did you know that many wine lovers and collectors are now tasting wine by moon phases too? According to those who swear by the technique, four different phases of the moon can impact the taste of your wine. Proponents say that if you happen to drink your wine during the “wrong” phase, you’ll end up with a much less flavorful experience, yet if you drink that same wine during the ideal moon phase, the wine will have bolder and more pleasant flavors.

How true is this theory, and should you practice this with your own collection? Here are a few essential points to consider before you let the moon dictate your drinking habits.

To taste your wine according to the phases of the moon, you need to pay attention to four types of phases: root, leaf, flower, and fruit. Each of these four phases has three astrological signs attached to them, and they allegedly impact the taste of wine in different ways.

Collectors who love tasting wine by moon phases will tell you to hold onto your most aromatic Bordeaux until the moon is in a flower or fruit phase. Some winemakers even claim to have experienced this phenomenon firsthand. Jo Aherne from Marks & Spencer told The Telegraph that a set of their wines were well-received at a tasting event one day, but the next, critics panned them hard. When they later checked the calendar, they found that the first day of the event was a fruit phase, while the second day was a root phase.

Why Science Hasn’t Backed the Theory

Although some collectors and winemakers swear that they can tell the difference between a root day and a fruit day, you won’t find many scientists who agree. That’s because the moon actually has far less physical impact on Earth’s liquids than one might think. The general theory behind tasting wine by moon phases is that because the moon has the power to move tides, it’s reasonable to assume that it can impact the liquid inside of a wine bottle as well. However, this isn’t entirely accurate; the moon only has some gravitational pull on one small area of ocean at a time (the area closest to it). As more water moves toward the spot being pulled by the moon, water along the edges (the tide) moves as well. In reality, scientists say that your gravitational pull on the bottle when you remove the cork is far greater than the moon’s pull on that bottle, even at its strongest point.

Gravity cannot physically account for the change in flavor of your wine, yet the moon phases can impact your psychology. If we expect to taste a bad wine on a root day, that’s likely what we will taste due to the placebo effect. Studies have also shown that people make illusory correlations when noteworthy events happen–in other words, they tend to make connections between two events that have nothing to do with one another.

For instance, wine journalist Jordan Mackay says, “I’m not to the point of planning my wine drinking around what an app says, but when wines seem to be especially vibrant or inexpressive, I usually find an eerie correlation between so-called good and bad days for tasting wine.” It’s likely that Mackay noticed those especially good or bad wines because they were unusual. We’re more likely to remember noteworthy events, like an especially bad wine. If we also believe strongly in moon phase tasting, we’re more likely to remember the wines that fit the theory (bad wines on root days), and forget those that didn’t (good wines on root days). In order to test this theory, we can’t rely on our memory alone, since memory is fallible.

An Experiment in Tasting Wine by Moon Phases

When I first heard about collectors tasting wine by moon phases, I knew I had to test it for myself. A while ago, I downloaded a wine tasting app on my phone that kept track of moon phases, and noted the results. The first wine I tried, a bold South African Syrah, tasted especially ripe, so I assumed it was a fruit phase. When I checked my phone, it was a leaf phase. The next day, I tried the same wine to see if anything had changed. The wine was certainly flatter than it was the day before, and I wasn’t nearly as impressed with it. I guessed it was maybe a root day, but when I checked the app, it was a fruit day.

I’ve since repeated the test multiple times throughout the year and in my experience, it seems random. Most of the time, I can point to other palate-killing causes like a bottle not being open long enough (or having sat in the refrigerator for a day), or eating an onion-heavy dinner beforehand. In my opinion, these factors were far more reliable predictors than the moon phases. However, our impressions of a wine are shaped by our environment, including our beliefs. If you believe in tasting wine by moon phases, then it’s possible that you’ll enjoy wine more when you know it’s a fruit day, as opposed to a root day. And–who knows–maybe there is something to the theory, something that other people’s palates have picked up on better than mine has. Either way, if it helps you enjoy wine even more, I say: keep checking that app.