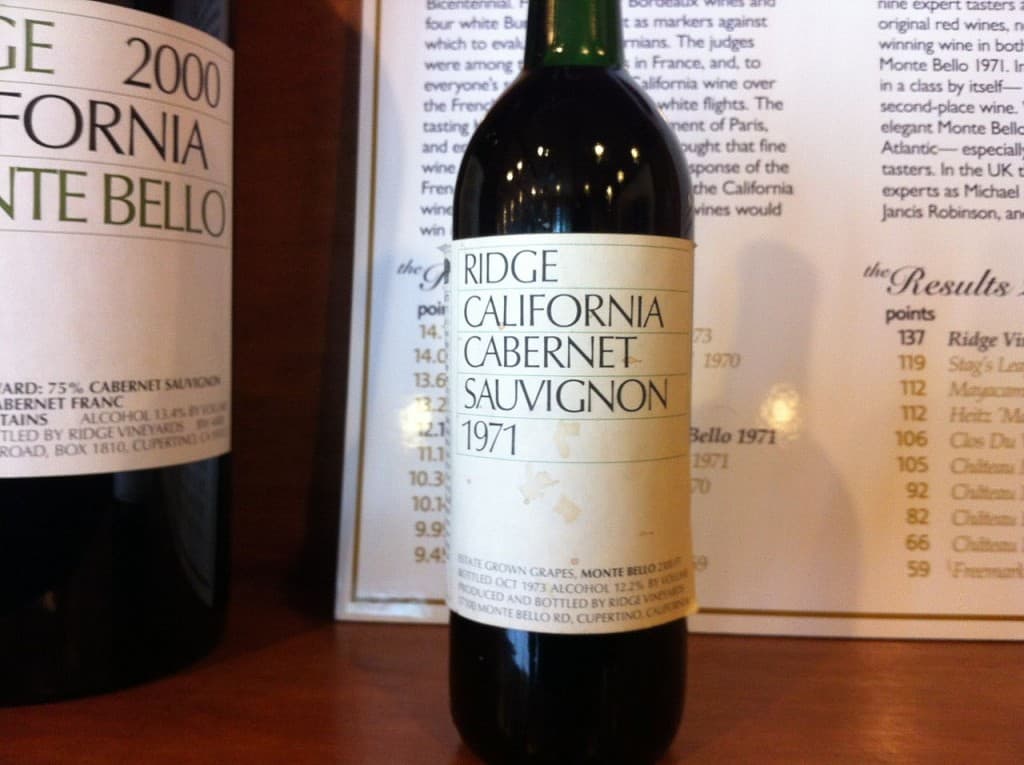 In 1971, Ridge produced its first and only Eisele vineyard vintage, and it has since become a rare, highly collectible wine. Photo Credit: Wikipedia CC user Agne27

When I first took an interest in wine, Ridge was my gateway to finer bottles. As a child, I’d visit my family in California every year, and I’d always see at least one Ridge bottle resting on the rack in my grandma’s pantry; it was her go-to celebration wine. By the time I was old enough to drink and finally had enough money to splurge on a decent bottle, I chose Ridge Cabernet Sauvignon from the estate’s iconic Monte Bello vineyard mostly to see what the fuss was all about. To this day, that was one of the most complex, aromatic bottles I’ve ever tasted.

Over the years, I’ve become more and more like my grandma; it seems like I always have at least one bottle of Ridge lying around. To me, most of these wines are meant purely for drinking, but that was before I discovered 1971 Cabernet Sauvignon from the estate’s short-lived Eisele vineyard. Unlike most Ridge wines which are relatively plentiful, the 1971 marks an important moment in Ridge’s history, and for that reason, it’s worth far more on the market than you’d imagine in its old age. I’m now on the hunt for this rare wine, and if I find even one authentic bottle, I plan on snapping it up.

What makes the 1971 stand out from other Ridge vintages? This is a rare wine with not one but two historical events tied to it. Ridge produced wine from its newly-founded Eisele vineyard for the first time in 1971, meaning that this bottle is the maiden effort for the estate in this region. However, this was also the last time that Ridge produced a wine in Eisele, making the 1971 utterly unique. Because the wine came from an entirely new terroir, you’ll never taste any Ridge wine quite like the 1971, and this fact alone makes it well worth a place in your cellar.

You might be thinking, “If this vintage is so superb, why didn’t Ridge stick with the Eisele vineyard for future vintages?” The answer lies in Prohibition. After Prohibition, Ridge had to replant most of the abandoned vines in their Monte Bello vineyard. This was a slow process, and by 1970, few of the vines were mature enough yet to produce fine wine. This left Ridge with only a handful of Monte Bello vines that had been planted in the 1940s, so production was extremely low. To make up the difference, Ridge asked Eisele Vineyards for help. The Eiseles were a retired couple who decided to pursue a new career as grape-growers in the 1960s, and in 1971, they sold Ridge some of the most concentrated, intense grapes the estate had ever seen, owing to their vineyard’s warm climate. The Eiseles later grew grapes for Conn Creek Winery and Joseph Phelps, leaving the 1971 Ridge Cabernet Sauvignon as the only vintage of its kind.

A Taste Before Its Time

When I read tasting notes for the 1971, I’m amazed that this wine pre-dated the Judgment of Paris in 1976. In the early 1970s, most serious wine critics claimed that California wines would never be age-worthy like Bordeaux or Burgundy, and yet the 1971 Eisele is still here more than 40 years later, charming the socks off of a new generation of wine lovers. At the time, Ridge didn’t expect this wine to age as long as it has; after all, winemakers in California had been told for decades that their wines would never stand the test of time compared to the French icons. The Judgment of Paris shattered this myth forever, proving that California wines can be just as age-worthy as rare wine from France, and this forever changed the way that California winemakers handled their grapes. They started emphasizing tannins and bold flavors, eventually leading into the jammy wines we find in every wine shop today.

The 1971 Eisele is certainly a rare wine, but it only became a popular cult collector’s item when collectors realized how intense and age-worthy it is. This is a 1971 Napa Valley wine that tastes like it was made in 2009, with big, bold flavors, sticky viscosity, and a strong backbone. Eisele was hotter than winemakers anticipated in 1971, and they decided that this was the perfect opportunity to craft the most intense wine possible. After the grapes fully matured under the California sun, Ridge’s Paul Draper says he wanted to emphasize their natural fullness. “I did not press until the biblical ‘40 days and 40 nights’ had passed and the caps had fallen to the bottom of the fermentors,” he said. His efforts paid off with one of the earliest examples of a California wine that has been proven to last almost half a century.

It’s hard to talk about 1971 Ridge Cabernet Sauvignon without comparing it to its peers. About seven years ago, a group of Monte Bello wine experts held a blind tasting that included the 1971, as well as a bottle of fine 1968 Bordeaux which the host assumed would be of similar quality to Ridge. What they found surprised them: the 1971 Ridge was far superior to the Bordeaux, and utterly memorable. One of the tasters said, “It was really easy to spot the Ridge because it was both stylistically and aesthetically intact, as well as structurally (read: drinkable!), and the other was, well, not so much.” What this means for your collection is that if you’re fortunate enough to run across Ridge’s 1971 Eisele in a shop, you don’t have to worry about investing in expensive vinegar.

It’s also worth comparing 1971 to its fellow Ridge vintages; in Monte Bello, Ridge is famous for its rich Chardonnay, which thrives in the slightly cool mountains near coastal Santa Cruz. This same weather tends to produce Cabernet that’s geared more toward aromatics and finesse than it is toward the intensity and fruit-forward flavors of its Napa peers. If you’re a fan of Ridge’s careful winemaking techniques, but you personally prefer a wine with a bolder streak, you might consider investing in 1971 Eisele, as opposed to more focused, acidic vintages like the 1999 Monte Bello Cabernet. In short, collectors will be talking about the 1971 long after every bottle of this rare wine has been enjoyed.