Should You Buy 2015 German Wine? A Closer Look at a Potentially Legendary Vintage 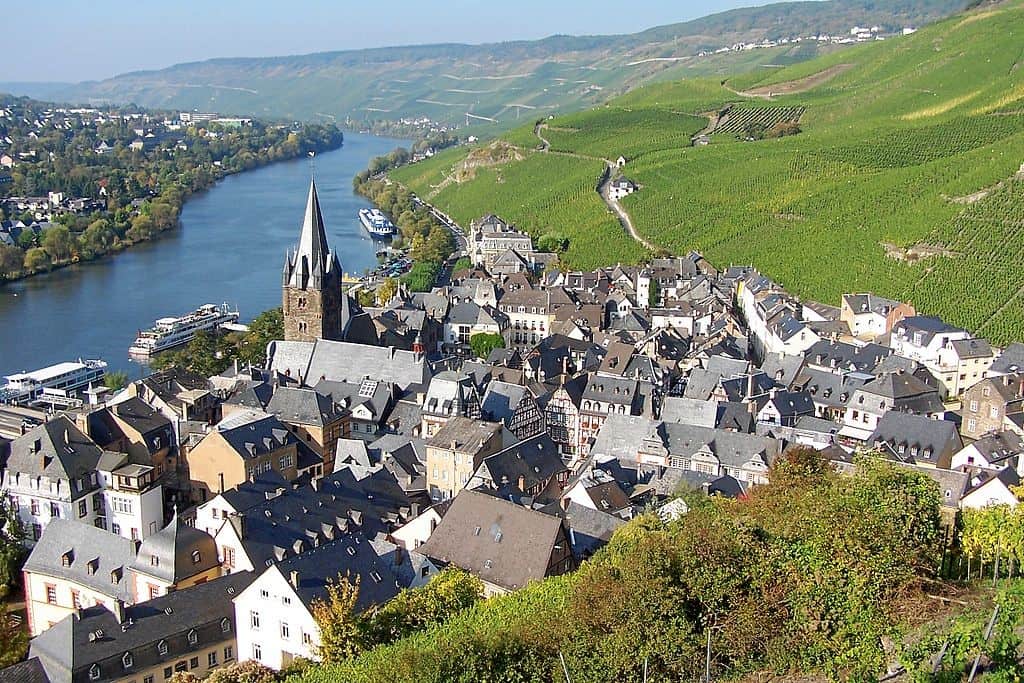 Some of the best 2015 German wine comes from Mosel, with bone dry Riesling that some critics are calling legendary. Photo Credit: Wikipedia CC user Berthold Werner

When you’ve been a wine collector for decades, “wine of the century” is a phrase you’ve likely heard dozens of times, yet you’d be lucky if even one recent vintage lived up to the hype. However, I’m not exaggerating when I say that 2015 German wine might make a fan out of the most jaded collectors who have seen it all before. As wine expert Michael Schmidt explains, “Since the turn of the millennium, the term ‘vintage of the century’ has been bandied about in Germany with free abandon several times already (for 2005, 2007, and 2009), only for flies to be found in the ointment some time later. But 2015 may well turn out to be the real thing.” What makes the 2015 vintage different from the super-hyped 2005? The answer lies in its perfect fruit and punchy acidity.

Few expected the 2005 to be of high quality early on because the weather fluctuated, being sometimes too hot and sometimes too cold; yet when warmer temperatures peaked toward the end of the harvest, the vintage’s quality increased dramatically. It was this drastic and unexpected increase in heat that gave the 2005 its momentum on the market. Suddenly, critics and collectors alike were paying attention to Germany, calling its 2005 Riesling, in particular, one of the greatest vintages ever produced. However, the hype was short-lived. Jancis Robinson initially praised the wine, but when she took a closer look at the dry 2005 vintages, she found them a bit too sweet. “I cannot put my hand on my heart and recommend dry 2005s as wholeheartedly as the traditional fruitier styles made in the more northerly wine regions,” she said.

That’s where the 2015 has the 2005 beat; unlike the 2005 vintage, the 2015 vintage had perfect weather from the start, and it only got better as the grapes matured. Bud break came late, and most vineyards finished flowering around the end of June. This gave the grapes almost three full months of sunshine with record-high temperatures that produced fully-ripened fruit. Just as the weather was getting a little too hot and dry (which can cause the grapes to be too sugary), a series of rainstorms hit Germany in late September, cooling the region right before harvest. This spiked the acidity of the grapes, and balanced out the excess sugar that threatened traditional dry white varietals. In short, while the 2005 succeeded despite the weather, the 2015 had legendary potential from the start thanks to ideal weather.

What makes 2015 German vintage so special is that no matter which varietal or producer you go for, you’ll have an excellent selection to choose from. Jancis Robinson says that quality was higher than usual in regions like Mosel, which is home to superb producer Maximin Grunhaus. Yields in this region were about 8 percent lower than average in 2015, which could increase the rarity and value of these wines on the market. It’s best to invest in any Mosel wines as early as possible, and if you plan on reselling them, waiting no more than a few years to take advantage of the excitement surrounding this vintage.

As with all great German vintages, you’ll also want to have three cases of 2015 JJ Prum, one for drinking young, one for longer storage, and one for potential resale. Don’t be afraid to invest in more bottles than you can drink when it comes to 2015 German wine; Wine Berserker’s forum member Dennis Kanagie says he already bought three cases, including two JJ Prum labels (Graacher Himmelreich Spatlese and Himmelreich Auslese) and another Spatlese from Mosel. He says, “If 2015 does live up to the hype, I’ll be happy as a pig in sheeyat. If 2015 is only as good as 2011 or 2013, I’ll be merely smiling.”

For any white varietal, especially German Riesling, you’ll want to consider Nahe producers like Weingut Hermann Donnhoff, which consistently produce wine that is of higher quality than even some of the top estates in the more famous Mosel. The wine you invest heavily in will depend on your personal preferences. Unlike lower-quality vintages, every white wine style is represented beautifully in 2015, whether you prefer your varietals sweet or bone dry. The good news is that for dry wine lovers, 2015 is finally moving away from the sweeter vintages of the past, especially in Nahe. In 1971, a German wine production law emphasized sugar levels above all else, believing that it was important to preserve the tradition of sweeter German wines. Now that Germany is heating up, winemakers are able to get ripe flavors and plenty of sugar in the grapes without having to add any.

Experiment with This Vintage

White German wines will be your safest investment, but if you’re looking to try something new, now is the time to invest in red varietals from Baden. The extreme heat gave Germany’s red blends an intensity and richness not normally seen in these wines. While you might not be able to resell these red wines for as much as their more popular Riesling peers, they’re well-worth buying to drink. I recommend ordering your established favorites in bulk, and leaving enough room for at least one case of something you’ve never tried before.