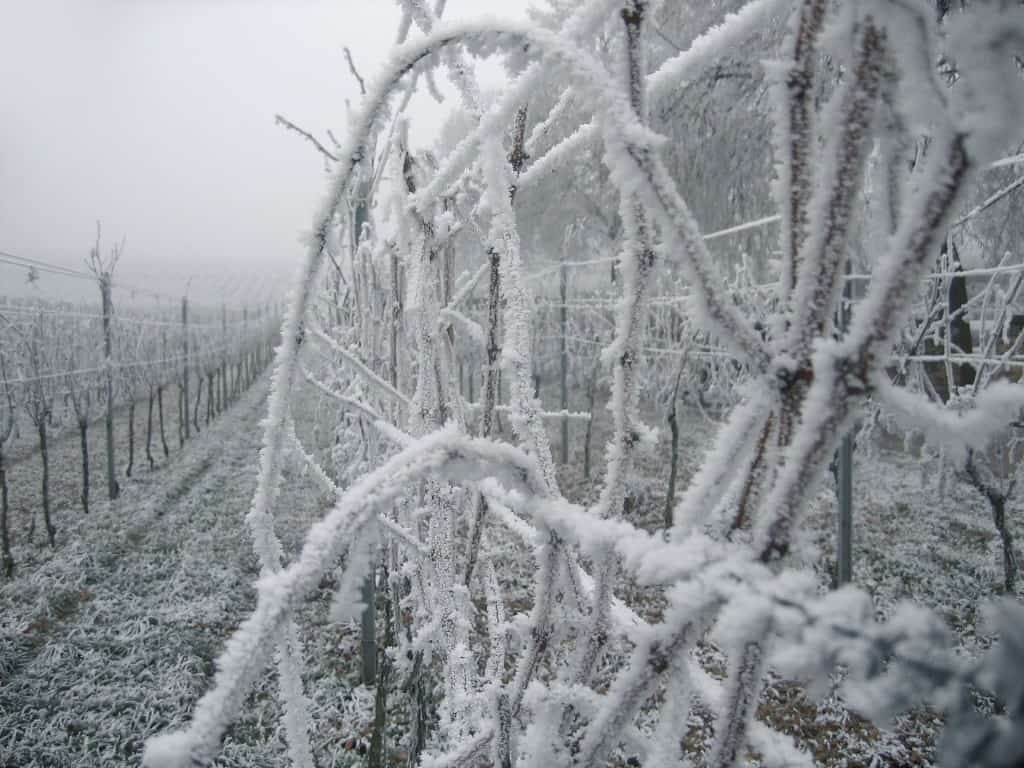 Early in the growing season, frost can kill off budding grape flowers, as it did in the 2016 vineyard frost in Burgundy. This leads to underripe flavors in the wine after harvest. Photo Credit: Pixabay CC user geralt

This spring, on April 26, the worst frost in 30 years hit Burgundy, wiping out potentially 30 percent or more of the budding grapes in the region. As temperatures dipped low, budding flowers were coated in a thick frost overnight, killing off the still-tender young sprouts. Damage estimates are still coming in, but so far, almost every producer has been impacted; some estates are hurting more than others, as a few producers have already lost 70 percent of their crops this year. Frost damage on this scale is an extremely rare event, and it has the power to devastate an entire vintage. In early fall, we could see a more immature, unripe harvest than usual in Burgundy, which will impact both wine prices and wine quality in the region.

What Frost Does to Grapes

To understand why Burgundy producers are terrified of frost, you need to know how this weather phenomenon damages grapes. Frost is a common problem in colder winemaking regions, especially early in the growing season when the weather is still unpredictable. Warmer regions like Bordeaux, California, and Burgundy almost never deal with major frost on this scale, which is what makes the news of the April 2016 vineyard frost in Burgundy so shocking.

In April and May, grape buds start to break from the vine, sprouting two or three basal leaves that house a delicate flower embryo inside. That flower is the future grape, and if it is killed before it has the chance to bloom, the vine has little hope of producing ripe fruit by the end of the summer. Frost attacks the tender basal leaves first, causing the flower bud inside to decay. This might seem bleak, but there’s a sliver of hope: if the buds haven’t completely frozen, new basal shoots might sprout from the old flower cluster, saving the crop. Even if every cluster on the vine is killed off, the vine will produce new shoots later in the season, when the weather is warmer, but it is unlikely that these late-developing grapes will fully ripen by harvest.

The late start stunts the grapes’ growth, depending on the varietal. Riesling can usually withstand some frost and fully mature later in the season, but Chardonnay withers away quickly when frost strikes, resulting in unripened fruit at harvest. Popular wines grown in Burgundy, like Merlot, Cabernet Sauvignon, Cabernet Franc, and Syrah also lack natural defenses against frost, meaning that these crops will likely be underripe this year. Frost-affected grapes are also more likely to develop botrytis as the dead plant material rots. Although some naturally sweet varietals are made better by this “noble rot,” the mold will produce a spoiled taste in wines that don’t usually have botrytis.

How Burgundy Is Coping with the 2016 Vineyard Frost

Now that the damage is done, there’s not much that Burgundy winemakers can do about the frost. Winemaker Caroline Parent-Gros adds, “Mother Nature decides; we have to live with that and this is the risk of our job. But it’s also a job of passion, and it is a big disappointment to see all our efforts to do the best to make great wines reduced to zero in one night.” The good news is that if frost strikes the region again over the next few weeks, the damage has already been done, so any new frost-overs won’t significantly impact already-damaged vines. As wines trade group director Guillaume Lapaque says, “You can’t set fire to a forest that has already been burned.”

When frost strikes, it’s a waiting game for winemakers. Studies have shown that cutting dead tissue off of the vines does little to nothing to help the future buds grow. Winemakers simply have to accept the loss and focus on keeping their next batch of buds safe. Burgundy’s producers are anticipating a lean year in 2016, since yields are likely going to be low. To keep customers happy, some winemakers are already seeking out assistance from banks to get them through 2016 without losing it all by 2017. Wine experts say that small, family-run estates have the most to fear this season, since they rely on adequate yields and high quality grapes to make a living. Larger, financially successful estates can usually survive one or two lean years.

What This Means for Collectors

The first change that you’ll likely notice due to the frost will be to the price of wine in Burgundy. Historically, when grape yields are low, prices in the region skyrocket, especially for producers who manage to get quality wines out of their vines. When frost cuts down yields, winemakers are forced to charge more for the remaining grapes in order to make up for their losses. Rarity is also a factor in price; a quality vintage made in a plentiful year will usually go for less on the market than a quality vintage made in a lean year. For instance, in 2009, grapes grew by the truckload in Burgundy, but by 2010, yields dropped dramatically and continued to fall until 2013. As a result, prices on Burgundy wine increased by about 30 percent between 2010 and 2012, because the wines were so rare. Some quality wines sold for as much as $50 more per bottle than they are normally worth.

It might be a good idea to invest in 2016 wines to take advantage of their rarity, as long as the wine is high-quality. If some producers in Burgundy manage to craft an incredible 2016 vintage, despite the frost, we may see these 2016 bottles sell for far more on the market than plentiful vintages like the 2009. While rarity will be an asset for 2016 wines, you should remember that frost can cause underripe, sweet, and spoiled flavors in grapes. Before investing in 2016 Burgundy, research every label carefully to find the producers that avoided these flaws. If the 2016 harvest season is warm and gentle, we may see more producers waiting to harvest their grapes as late as possible to ensure that they are ripe enough. Time will tell how well Burgundy wines hold up this year, and we won’t have a better idea of whether these are wines worth collecting until at least September.