Which Wine Ratings Should I Trust When Buying Wine for a Collection? 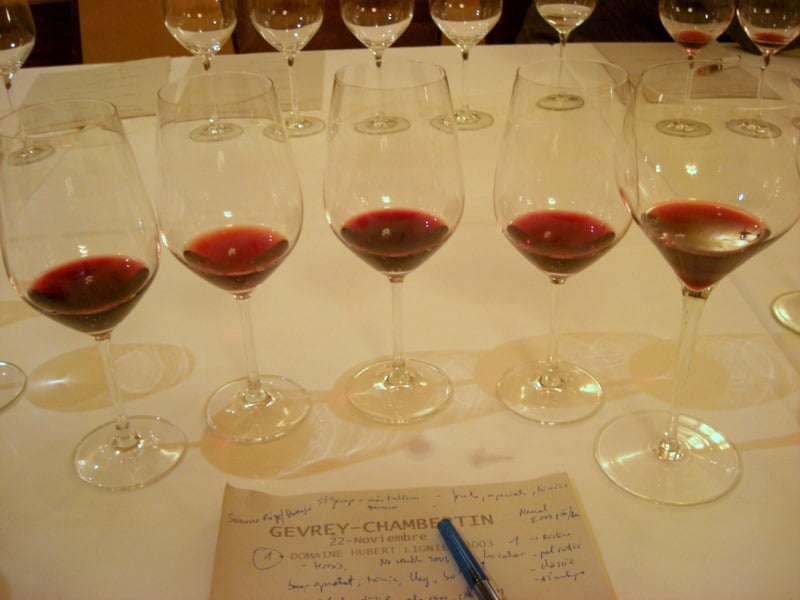 Blind tastings allow wine critics to rate wines fairly based on palate alone, but some studies have shown that palates aren’t always as trustworthy or consistent as you might expect. Photo Credit: Wikimedia CC user e_calamar

The best wine critics in the world act as gatekeepers of the wine market. They have the power to sink a wine with a terrible review, or raise a wine up to legendary status. However, wine critics aren’t always consistent with their ratings; a study in the Journal of Wine Economics found that in blind tastings, wine critics deviated from their scores on a single bottle of wine by as much as four points or more on the 100-point scale. Researchers conducting the study submitted a test wine to a wine competition to see how it would fare among the wine critics. The idea was to give every critic the same wine on three separate tastings, noting whether the critics changed their opinions on the wine as the competition wore on. The critics had no idea that they were tasting the same wine three times. Researchers expected the critics to rate the wine virtually the same throughout the competition, but instead, they found that the ratings were dramatically different. A critic might have rated the wine as a 95 at the start of the competition, but rated that same wine as an 87 on the second tasting and as a 98 on the final tasting.

Everyone’s palate changes day by day and even hour by hour, so it’s difficult for anyone to rate a wine with the same score every time it’s tasted. Knowing this, how can a collector trust wine ratings at all? Well, the key to getting the most out of wine ratings is to follow one of two steps: either choose to take advice from a wine critic with a similar palate as your own, or think of wine ratings as larger chunks of information, rather than relying on individual wine reviews.

Research and “Interview” Your Wine Critics

There are thousands of wine ratings out there, so it’s important to find one or two wine critics you trust. This is easier said than done, especially knowing that wine critics’ palates vary day by day. However, some wine critics are more consistent than others. For instance, Robert Parker took part in one blind tasting study in which researchers found that his ratings stayed within about three points of one another. Finding the most trustworthy wine ratings involves researching the finest wine critics in the wine business today. Some of the best wine critics on the modern wine market include Stephen Tanzer, Robert Parker, Jancis Robinson, James Suckling, Neal Martin, Tim Atkin, and Allen Meadows. Generally, if you see a wine review written under one of these bylines, chances are good that the wine has been rated fairly, though still according to each critic’s individual taste and preferences.

What if you see a review from a name that you don’t recognize? It’s always a good idea to do some research on the critic before you consider that reviewer’s ratings. Do they have any wine education qualifications, like MW status? Have they worked with wine before, and if so, in what capacity? Treat the wine critic as if you were hiring them for a position as your personal wine guru. What are the qualifications that you would want to see to feel comfortable taking their wine advice? Not all critics need to be former winemakers or have formal wine educations to know a great deal about wine. Research how many reviews the critic has published. If they haven’t published many, stick with a wine critic who has more experience writing reviews.

Once you’ve established whether the wine critics you follow are qualified, you’ll need to pick one or two of them whose palates match yours as closely as possible. This isn’t by any means an objective science. On the Wine Spectator forum, one forum writer complained that Wine Advocate ratings never matched his own ratings, yet he always agreed with Wine Spectator’s ratings. Another forum writer responded, “This post reminds me of Bizarro Superman. In other words, I feel exactly opposite.”

You can’t rely on what other wine lovers think of wine critics if you want to find your personal, trusted wine guru. You need to taste some wines that a critic thinks highly of, and also taste some wines a critic hates, in order to understand their preferences and compare them to your own. You can always do this by buying a few wines that elicited strong opinions from critics and see which reviews you agree with. However, this can be a complicated and costly process.

The best way to test whether a critic is trustworthy is to be patient and read up on every wine review you can for each bottle you drink. Start by writing your own tasting notes for every wine you drink. Upload those notes to the Vinfolio forum for safekeeping, then compare the notes you wrote with what critics are saying about the wine. Tally up the critics that agreed with you, and see if you can find any patterns over time. After tasting a few wines, are there any critics who seem to agree with you more often than others? For instance, you might find that you always agree with Jancis Robinson on Rhone wines, or that you love James Suckling’s favorite Cabernet Sauvignon vintages. Feel free to mix and match, following certain wine critics for certain varietals or regions. These are the critics you should turn to if you ever need advice about what wines you’ll enjoy.

If you can’t seem to find a wine critic who shares your views on wine, you can still use wine ratings to your advantage. Rather than reading wine reviews like the gospel, you can take a statistical look at the data as a whole. A study found that the four major wine review publications (Wine Advocate, Wine Spectator, Wine Enthusiast, and International Wine Cellar) typically had similar scores on the same wines, but dramatically differed from one another in a few key areas. Wines reviewed by Wine Enthusiast were more likely to have lower ratings than wines reviewed by the other three publications. When the researcher looked at the rating standards of each publication, she found that Wine Enthusiast uses a slightly different rating scale than the other publications. An “acceptable” wine for Wine Enthusiast is one that is rated between 80 to 82 points. However, an “acceptable” wine in Wine Advocate and International Wine Cellar is between 70 and 90 points, and Wine Spectator requires an “acceptable” wine to have a score of 75 to 79 points.

This is why the researcher suggests only comparing wines between these publications if they are rated at an 85 or higher. The publications are more consistent with one another the higher the ratings go, making relatively easy to see which wines were most-loved by critics. To follow wine trends or decide whether you want to buy a particular wine based on ratings, you should gather review scores from these four publications and any other professional wine reviewers you can find. Add up their scores, then find the average score between them. You might find that a wine that received an 88 from one critic and a 98 from another critic averages out to about a 95 overall when you look at all of the critics’ opinions. If you see that a wine is getting consistent praise across the board, you know that it’s a wine that’s worth your attention, even if you don’t sit down and read every single review written about it. Wine ratings are still subjective, but looking at them as a data set can help you make an informed choice.