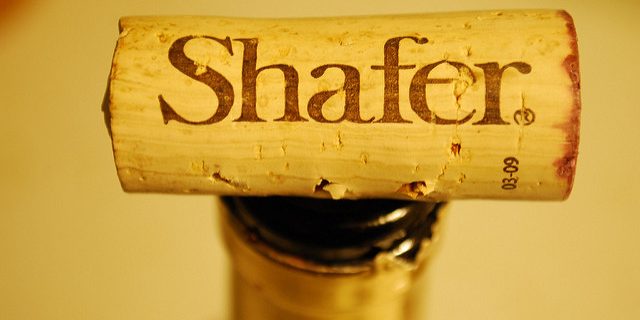 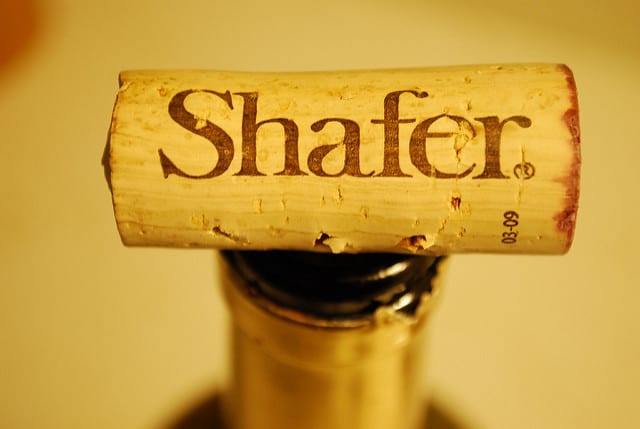 Shafer wines are famous for their big, jammy flavors, yet they often retain these flavors well into the wine’s life, remaining bold decades after being bottled. Photo Credit: Flickr CC user GoonSquadSarah

Backlash has been brewing over jammy, bold California Cabernet. Critics of wine “Parkerization” (named after wine critic Robert Parker) claim that these big Cabernets are the epitome of what’s wrong with the modern wine market; namely, that subtle flavors are being sacrificed for bold, rich notes that fade quickly. Winemaker Bill Dyer adds, “Colors fade early, the gobs of fruit get punky and pruny, and they go hollow in the middle.” However, not all bold winemakers in California make the sort of wines that Dyer describes. Shafer’s 2002 vintage certainly hasn’t fallen victim to “hollow flavors,” combining a fruit-forward structure with refined finesse. Collectors who enjoy a bold Cabernet, but who, like most modern collectors, are looking to avoid bold wines that fade quickly in a cellar, will find success with the 2002 Shafer Cabernet Sauvignon Hillside Select. This vintage has held up beautifully over time, and hasn’t lost any of its youthful fervor.

According to International Wine Cellar’s Stephen Tanzer, what sets the 2002 Shafer vintage apart from many of its California peers is a youthfulness that stays with the wine longer than most bold, jammy wines from the region. Tanzer says, “[The wine] boasts a combination of lushness and energy that’s rare for California Cabernet.” What did Shafer do to achieve this, and why has this wine been so successful among a diverse range of critics? The answer lies in the 2002 weather and in Shafer’s careful tending of the vines that make up the Hillside plot.

In 2002, Napa Valley growers were forced to severely limit their crops by the end of the harvest season. A spring frost culled plenty of fruit before it had the chance to bud, and a cool summer somewhat stunted the growth of many of the grapes in the region. By the time warmer weather arrived in September, most winemakers decided to push the harvest back to let the remaining grapes ripen just a bit more before being picked. The result was a fruit bomb of a wine; the mild summer weather produced small, highly concentrated, acidic fruit, while the intense sun exposure later in the season brought sugar levels back up shortly before harvest.

However, not all Napa Valley estates had success in 2002, so the weather can’t fully explain why critics loved Shafer’s Hillside Select so much. Rather, it’s the estate’s one-of-a-kind terrain that had the greatest impact on the grapes. The Hillside Estate is located on an ideal plot of land in the Stag’s Leap District. Knolls in the slopes coupled with shallow bedrock below work together to keep the vine roots nearly bone-dry throughout the year. No matter how much rain the vineyard receives, Shafer’s grapes usually remain small and concentrated, rather than becoming large and diluted with excess water. These slopes also receive cooling winds from the San Francisco Bay in the evening, which means that the wine retains acidity, even in the hottest seasons. That said, hot growing seasons in the area tend to produce wines that are almost overwhelmingly jammy and fruit-heavy; in 2002, the weather gave the fruit some breathing room, allowing subtlety and finesse to shine through. This is why investing in Shafer wines from cooler summers is the perfect option for collectors who love a rich Cabernet that doesn’t sacrifice balance.

If you’re worried about a bold Cabernet being difficult to drink in its youth, or losing its power as it ages, you won’t have to be concerned about Shafer’s 2002 Hillside Select. When Robert Parker first tried this wine, he said that it was a huge fruit bomb of flavor, even more so than the fruit-forward 2001 vintage that came before it, yet the wine retained its structure, evening out the huge fruit flavors. The wine was still very young when Parker first tried it, and yet he said it was perfectly enjoyable to drink. In fact, he wasn’t sure whether the wine would age as well as the 2001 simply because it was so enjoyable to drink in its youth. He claimed that the 2001 was a “long-distance runner,” while the 2002 was more of a “mid-distancer.”

It turns out that Parker might have been slightly premature in his first review; a recent review of the 2002 from a Vinfolio wine forum collector reveals that the wine has held up beautifully as it has aged over the past 15 years, and could last another 10 years in the cellar. This means that collectors can safely invest in this highly-collectable Shafer wine without worrying whether the wine will lose its spark a decade from now.

Other Shafer Wines Worth Collecting

If you want a bold, fruit-forward wine, but also enough structure for the wine to retain its longevity, what are the best Shafer vintages to buy right now? To start, you should consider Hillside Select wines from relatively cool growing seasons, like the 2001, 2002, 2003, and 2008. Robert Parker recently revisited the 2001, 2002, and 2003 vintages, and gave them all retroactive 100-point scores. He found that all of these wines had aged better than he ever could have expected, and have all earned that coveted perfect score.

Shafer’s Cabernet Sauvignon is an excellent choice for collectors who want a bold wine that will likely still be worth a great deal on the secondary market a decade from now. If you want an option outside of Cabernet for your cellar, consider the estate’s Chardonnay, which leans toward the bright, acidic end of the spectrum. If you want something a little closer to the estate’s flagship Cabernet, try the Merlot, which has a similarly bold structure and also lasts for decades in a cellar. Quality wines will always be in style, and Shafer has proven to be a lucrative investment with its 2002 vintages.

Your Guide to Wine Valuation: Find Out How Much Your Bottles of Wine Are Worth
June 18, 2021
SEARCH
RECENT POSTS
SIGN UP FOR OUR WINE OFFERS