Sine Qua Non Wine Is More Than Just Syrah: Why You Should Consider the Lighter Side of This Estate 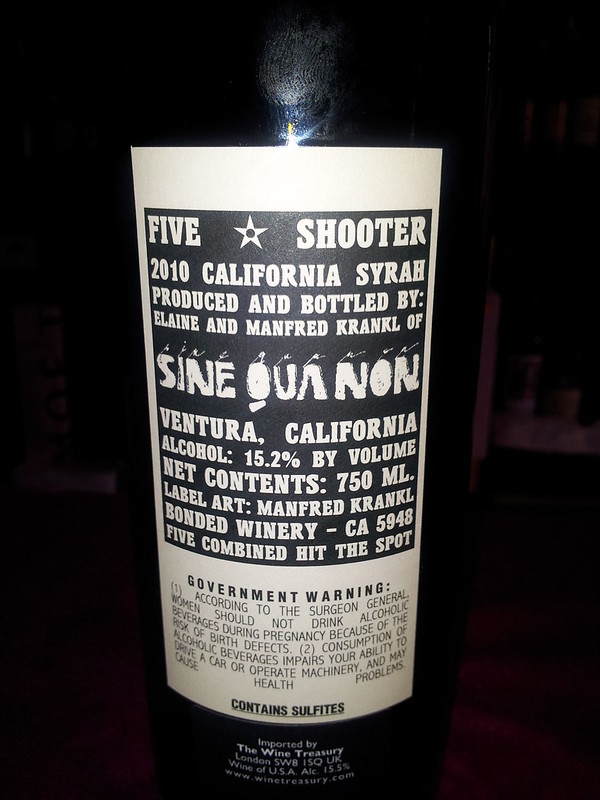 Sine Qua Non is best-known for its Syrah labels, including the Five Shooter, but its finest white blends and rosé labels are often underrated and overlooked. Photo Credit: Flickr CC user Dominic Lockyer

From its birth in 1994, Sine Qua Non has been a must-try cult winery. Robert Parker gave the young winery a boost when he awarded Krankl’s first-ever Sine Qua Non release a score of 95. At the time, this was the highest score any American Rhône blend had ever received. The estate’s immense popularity stems from Krankl’s focus on innovation; he rarely releases the same label twice, preferring to make improvements to his wines every year. Screaming Eagle’s Charles Banks once said, “Every now and then, you’ve gotta Krankl.”

Sine Qua Non wine is some of the most valuable in California, with their Poker Face Syrah averaging $760 on the market. This estate’s Syrah labels are by far its most popular, but it can be worthwhile for collectors to think outside of this grape when they invest in the estate. Although white wine labels like Mr. K The Strawman are less famous than the estate’s Syrah, they still go for an average of $387 per bottle. While collectors investing in white wine and rose from Sine Qua Non are in the minority, this is a good thing in several ways. We’ll discuss three offerings from Sine Qua Non that are less commonly collected than the estate’s reds, and we’ll show you why they’re worth pursuing.

Few California cult wines are as rare as the 2012 Pearl Clutcher. Sine Qua Non made just two barrels of this label, and it has quickly become a sought-after bottle for serious collectors. By comparison, the estate’s more mainstream Just for the Love of It Syrah has 1,000 cases on the market, and collectors still have a difficult time getting their hands on those bottles. For collectors, this means that seeking out bottles of Pearl Clutcher can actually be more worthwhile than buying the estate’s flagship Syrah labels. In addition to its immense rarity, this label marked one of the few times the estate has released a 100 percent Chardonnay wine, as most of the time, Manfred Krankl prefers to blend this grape in smaller proportions. The high quality of the Chardonnay grapes grown that year, coupled with the limited number of bottles released, has caused this wine to reach a value of $1,700 or more per bottle.

Because of its steep market price, it would have been ideal for collectors to get their hands on Pearl Clutcher bottles the moment they were released on the estate’s elite mailing list. However, this wine is still young enough to be an essential buy for collectors. Critics estimate that the wine will reach its optimal drinking age in 2018, meaning that collectors will get the best value by purchasing bottles between now and 2017. That said, Wine Advocate’s Jeb Dunnuck insists that Sine Qua Non fans have ample time to invest in this wine, saying, “I’d drink it over the coming 3-4 years, but it will evolve for longer.” While it’s not generally a wise choice to resell a bottle past its peak drinking date, especially a white, the Pearl Clutcher is an exception to this rule. This is a wine that will only become more valuable as time goes on, and is well worth a couple more years in the cellar to ensure top dollar.

The Tasting Show-Off: 2011 The Moment

Jancis Robinson once lamented, “Some wine collectors need to be reminded every so often that wine is for drinking!” Truer words could not have been spoken for Sine Qua Non’s 2011 white blend, The Moment. The cult status of the estate has earned it such a rabid fanbase that some wine enthusiasts are afraid to actually drink the wines they purchase on the mailing list. Collectors either feel that they are wasting an investment wine on a tasting, or they fear that drinking the wine too soon will ruin the experience. The Moment is an ideal choice for collectors who want to enjoy drinking their wines.

The reason for this is that The Moment, at about $160 a bottle, costs significantly less than rarer bottles like Pearl Clutcher. This means that collectors can buy more bottles of the wine without much of a price markup. This is a wine best purchased in multiples of three or four; one or two bottles can be enjoyed during a dinner or tasting party, while the others can be kept for resale later. By drinking least one bottle of this wine personally, collectors can more easily decide how long to cellar the other bottles before selling. Made with 57 percent Roussanne, 19 percent Petit Manseng, 17 percent Chardonnay, and 7 percent Viognier, and aged for 16 months in a variety of containers, collectors are unlikely to ever encounter the exact same blend of these grapes in any other wine, which makes this vintage well worth trying.

The New Market Darling: 2013 …And An Eight Track Rosé

If current wine market trends continue, the Sine Qua Non label that will bring collectors an unexpectedly large profit is the 2013 …And An Eight Track rosé. This wine is made with a blend of 85 percent Grenache, 10 percent Mourvedre, and 5 percent Syrah, making it a rather red-heavy rosé blend. Overall, rosé is becoming the most popular wine of choice for Millennial drinkers, according to a recent Gallo poll, so it is worthwhile for collectors to think about this blend for their cellars now. This rosé in particular is a good option because it combines bottle rarity with a modern take on light red wine flavors. While many Californian rosés in the past have been on the sweeter side, made using more white wine than red, this Sine Qua Non wine is dry and deep in color, more of a light red wine than a rosy white.

Krankl made only 2,856 bottles of …And An Eight Track Rosé, making it a relatively difficult find on today’s wine market. Currently, each bottle costs an average of $300, but since it is expected to age for another decade at least, collectors can expect to see this value climb over the next 10 years. This is all thanks to the longer drinking window afforded to this wine from its blend of intense red varietals with softer Mourvedre grapes. The wine has the lasting power of a concentrated bottle of Syrah, but with the refined, delicate flavors of a traditional GSM blend or Rhône rosé. Recent rosé offerings from this estate make an excellent investment, as they will cellar well for several years, and over time will garner even better returns on investment as rosé gains fans among younger drinkers.

Whether you are starting your high-end wine collection or adding to an established portfolio, Vinfolio is your partner in buying, selling, and professional storage. We carry excellent investment wines from the best producers in California, including Sine Qua Non. Contact us today to get access to the world’s finest wine.