50 Years Marketing the World’s Most Extraordinary Wines: Part 1 of an Exclusive Vinfolio Interview with Jack Daniels 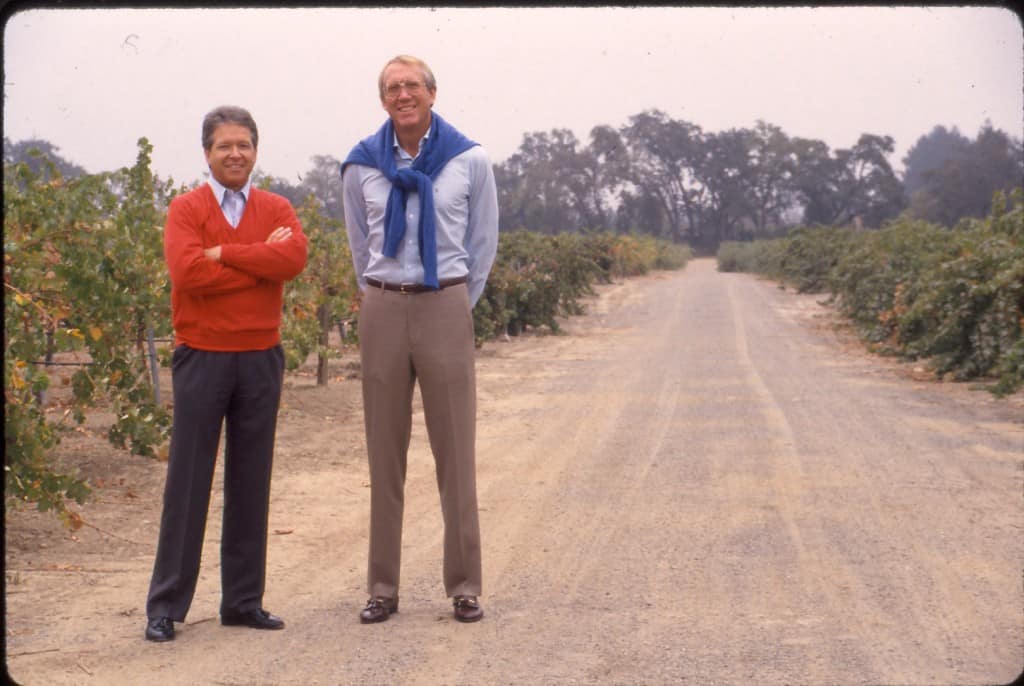 Since 1978, the Wilson Daniels company has maintained one of the world’s most selective fine wine and spirits portfolios. Over the years, founders Win Wilson and Jack Daniels distilled a family-driven philosophy, treasuring their relationships with a strategic mix of terroir-based luxury producers who set the tone for winemaking across the world’s top wine regions. Among these connections, perhaps the most relevant is the one established with Domaine de la Romanée-Conti, for which Wilson Daniels has been the exclusive US importer for a solid 36 years.

A pillar of the company’s success, Daniels, who is by now a mythical figure in the world of wine, first became involved in the Napa Valley industry during the harsh, Northern winter of 1964, while he was still a student at the University of Wisconsin.

“It was 50 degrees below zero and I said, ‘What am I doing here?’ Daniels recalls. “A friend and I went down to Newport Beach in sunny, Southern California and, by sheer chance, my first job just happened to be in the wine business with a large spirit and wine company.”

While Daniels’ rapport with the wine industry may have begun almost by accident, it didn’t take him long to realize his calling. “I really fell in love with wine and became a serious student, striving to learn everything I could,” Daniels said. “The company I was working for hired me in their wine division in Southern California and, after a few months, sent me to Colorado to manage the Rocky Mountain Region. I was with them there for about six years and had a lot of success promoting their brands. That’s when I decided that if I could be successful for them, then I could also be for myself.”

Daniels briefly worked for Dionysus, a small wine-only wholesaler in Colorado, where he became the general manager before interests in the company were sold to Phillips Distilling Co. of Minneapolis, owner of Belvedere vodka. Daniels then moved to Napa and worked with Chappellet Vineyard, which went on to become one of the first wine producers to ship Napa Valley wines throughout the United States. When word of his success got out, Daniels started getting phone calls from other wineries, which were keen on receiving his recommendations to boost their national sales.

Daniels recognizes those first consulting inquiries as a turning point in his career, “A little light went on, and I realized this was an opportunity for a business of my own. In turn, my good friend and partner, Win Wilson, was at another winery at the time. We formed a company and started marketing Napa Valley wineries and setting up their sales, marketing, and distributor relationships around the U.S. Our timing was perfect, as there weren’t very many Napa Valley wineries shipping outside of California at the time.”

“We were quite successful early on and in 1979, co-proprietors of Domaine de la Romanée-Conti walked into our office and asked if we were interested in becoming exclusive U.S. importers for their brand,” Daniels recalls with a hint of nostalgia. “We immediately said ‘yes’ and that decision dramatically changed the focus and face of our company.”

From that moment on, Wilson Daniels prospered, taking on strategic and important brands from all over the world and creating an elite portfolio. The company had salespeople across the country, and built a warehouse in the Napa Valley to store the wines that they imported.

When asked about the secret of his company’s success, Daniels sounded confident, as if he had pondered the question many times and found his answer long ago. “I think it’s timing. Timing and luck. You make your luck. We made our luck because we were interested in what we were doing; we cared and we were passionate about it. We learned the business very well and became highly knowledgeable about wines not just from Napa Valley but from all key wine producing regions around the world.”

The Transformation of Wilson Daniels

“Following the sale, I took a sabbatical and built a home in Mexico, where I lived for almost eight years. One day I received a call from the Underwoods asking if I would consider returning to assist them,” Daniels recalls. “The company had taken a different direction. They asked if I could help them redirect it to the original core values and vision that Win and I had had as the foundation for the company.”

In late 2012, Daniels returned to the company he had built from the ground up, to reconnect the company with its roots. “We had had only wines at the high-end of the portfolio — only the top properties — and the new ownership had somehow lost sight of our original goals and vision.”

The Underwoods have never regretted their decision. As Vern Underwood, chairman of the board of Wilson Daniels, remarked at the time, “Bringing Jack back on board at this time allows us to combine the heritage of the company with a diverse portfolio while we develop a new strategic vision for the future.”

While Daniels’ return might seem like a nod to the past, it was, in fact, proof of the company’s willingness to look to the future, as was the next major change Wilson Daniels made.

On June 1, 2015, the company hired their new president, Rocco Lombardo, the former president of Frederick Wildman & Sons. Meanwhile, the company began preparations for the opening of an office in New York.

In light of Lombardo’s hiring, Daniels is set to take on a more strategic role, focusing on planning and leveraging the company’s relationships, rather than taking care of day-to-day responsibilities.

When asked about Lombardo, Daniels was extremely optimistic about the new president’s potential to have a lasting impact on Wilson Daniels, “He comes from a company that has the same core values, basically the same vision, as Wilson Daniels and, therefore, there will be a smooth transition. He is extremely capable, very talented, and highly experienced. There is no doubt in my mind that Rocco can take Wilson Daniels to the next level.”

As confident as he is about the company’s future, Daniels is no stranger to misgivings about the market’s present state. “It would be difficult for a new company to do today what we did back in the 70s. The market has changed: there are fewer distributors, the larger ones have consolidated with the smaller ones, and they have a lot of brands to represent, a lot of masters to serve,” he laments.

“There was a time when distributors actually built brands. Today, that becomes more difficult, because the brands with very high volumes tend to get their attention, rather than the smaller brands. While we offer them prestige and high profits on their sales, we still don’t have the same clout as the big brands that put out millions of cases a year. That’s why we have to have more sales people working directly for Wilson Daniels now, and working hand-in-hand with the distributors. It’s a different market today.”

As a key player in the evolution of the wine industry, Daniels is full of ideas about the future of winemaking. As researchers devote lengthy papers to the implications of climate change for wine production, Daniels takes a pragmatic view of the problem.

“Obviously there is going to be an effect, and I think we are already seeing some changes,” Daniels says. “A classic example is this year’s harvest in Burgundy and the Napa Valley, which is as much as a month early due to the hot season. I believe climate change is here, and it’s happening, but there will still be great wines to drink amid the change.”

“Some people look at it scientifically, and others look at it as what they perceive to be realistic,” he says. “As far as I know, different climates and soil conditions are simply better for different grapes. The warmer the weather, the more it is going to favor the growth of certain grape varieties. If it stays cool during the usual season, then the scope of the change will be smaller; if it gets very cold, however, winemakers are going to switch to grapes that can prosper in that environment. As history has shown, grapes are a diverse crop.”

“The climate in other wine regions of the world is certainly different than the climate here in the Napa Valley, and the truth of the matter is that many different wine regions produce excellent wines. Regions may shift, varietals may migrate, but I believe we will most likely not be wanting for extraordinary wines.”

Developed over many years of careful selection, the criteria for inclusion in the Wilson Daniels portfolio are quite strict. The company builds upon personal relationships with their featured vineyards, an easy task considering their love for excellent wine. There are many other important factors as well.

“Secondly, the wine is generally at a higher price point, due to its limited production and handcrafted style, accompanied by a great story to tell.”

“We try to enjoy our personal connections with winemakers and have fun following our passion. At the same time, we are true to our core values and vision, and we stay disciplined and focused on that vision,” Daniels explains.

Over the years, that passion has been fuelled by Daniels’ encounters with many an extraordinary vintage. “Three months ago, I enjoyed 1919 and 1935 Pinot Noir. They were both extraordinary, even though Pinot Noir is a more delicate or feminine grape than a Cabernet. The wines still had life in them, because there was such balance, elegance, and finesse. And those wines, as they grow, come together and grow more complex as the years go by,” he adds.

In spite of his significant role in the rise of California wines in the world, Daniels recognizes a distinct advantage European wineries have over the New World, “In Europe, families that are twentieth, twenty-fifth generation – like the Antinori family – have been around for so long that they have been able to develop a unique tradition,” he says. “Perhaps in a few hundred years, California will be able to compete.”

Daniels leaves the words hanging in the air, and they sound more like a promise than like a wish. After all, this is a man who has taken on seemingly insurmountable challenges and come out victorious. Everything seems to indicate that with Daniels back with the company and Lombardo at the helm, Wilson Daniels is preparing to transform the world’s fine wine market again. As his story shows, Jack Daniels is not the type of man to pass on an opportunity to make history.

Since its founding in 2003, Vinfolio has been dedicated to the rarest and highest-quality wines for the collector market. Located in San Francisco and Napa, we are a company of wine experts who understands the value and importance of wine provenance. Thus, we offer wines from Wilson Daniels’ star label Domaine de la Romanee Conti. To learn more, visit Vinfolio today.

A Guide to Aging Champagne: Sommelier Cara Patricia Higgins on Why It’s Worth Cellaring Champagne
February 14, 2017

Where Are the Modern Wine-Loving Presidents? The Changing Drinking Habits of U.S. Presidents
December 12, 2016

A Question of Taste: Part 2 of an Exclusive Vinfolio Interview with Jack Daniels
January 30, 2016