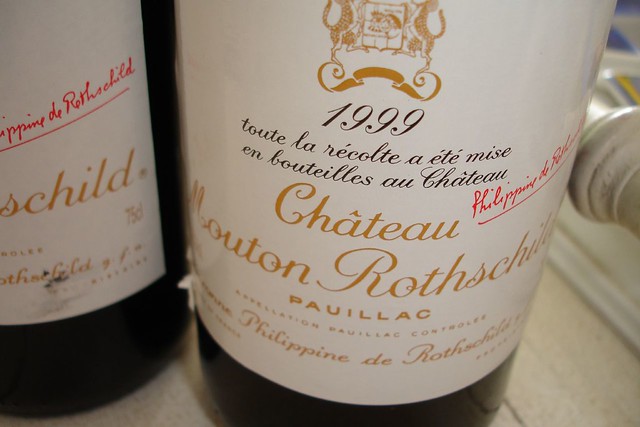 Mouton Rothschild is an icon of Bordeaux, however, the 1855 Classification ignored the estate in favor of French-owned producers. Photo Credit: Flickr CC user Heidi Strean

Today, wine collectors consider Mouton Rothschild synonymous with premium Bordeaux, but this wasn’t always the case. The 1855 Classification in France passed over the estate in its first round of surveys, refusing it the title of Grand Cru. Despite the estate’s centuries-long history of viticulture, and its growing reputation as a role model for fine Bordeaux blends, it took decades of fierce lobbying to overturn the wine authorities’ initial decision.

The estate that would later become Mouton Rothschild originated as Chateau Brane-Mouton. For centuries, winemakers had cultivated the vines on the estate, but in the 1850s, the owners were forced to sell the land due to declining commercial interest. In 1853, Nathaniel de Rothschild bought the estate at auction, and immediately put in place the techniques that would help his wines compete with his Medoc neighbors. Two years later, the London-born Rothschild was looking forward to his place on the 1855 Classification, only to find that experts ignored his estate entirely.

Rothschild called the decision “the monstrous injustice,” and worked tirelessly to appeal the decision. While he focused on developing his wines, he wrote letters to movers and shakers of the wine world, and offering tastings to any wine expert who doubted the quality of his estate’s terroir. His persistence eventually paid off, and Mouton Rothschild became the first estate in history to successfully overturn a First Growth classification decision. To celebrate, Rothschild changed his estate’s motto from “Premier ne puis, second ne daigne, Mouton suis,” meaning “First, I cannot be. Second, I do not deign to be. Mouton I am” to “Premier je suis, Second je fus, Mouton ne change,” meaning, “First, I am. Second, I used to be. Mouton does not change.”

Modern wine historians believe that the exclusion of Mouton Rothschild was a deliberate act on the part of the Classification committee. Experts were thorough about their survey of each of the estates in Bordeaux, and as such, it is immensely unlikely that experts failed to notice Rothschild’s wines. The prevailing theory among wine historians is that Rothschild was passed up as a result of being English, and the decision had nothing to do with the quality of his wine. Early documentation of the wines on his estate prove that many passionate wine drinkers believed strongly in the quality of Mouton Rothschild wines. Even soon after Rothschild took over as producer, the wines equaled the quality of other First Growth producers in Medoc.

France and Britain had been deep in competition since the 1300s, when Britain developed a newfound pride in its identity. After decades of battles, France and Britain began a cultural rivalry in the 1400s that continued through the 1700s, culminating with the French Revolution in the 1790s. With France no longer undergoing class warfare, artists and winemakers emphasized French cultural icons above all others, leading to the 1855 Classification.

Wine authorities claimed that the Classification would be a guide for collectors to choose the best vintages from each region, but it was also a tool to establish French terroir as being of the highest quality in Europe. As the only premium English producer in Medoc at the time, choosing Mouton Rothschild for a First Growth distinction would have marred the reputation of the French people as having a special claim on growing the finest wines in the world.

What Classification Means for Terroir and for Collectors

Wine collectors like Michel-Jack Chasseuil specialize in collecting only the finest Grand Cru wines from France, and Chasseuil even creates customized vaults for his most-treasured vintages. Wines that have Grand Cru or First Growth status increase exponentially in market value, as collectors like Chasseuil dedicate their lives to finding the rarest bottles of the highest classification. In this sense, if Rothschild had not defended his estate against the Classification snub, his wines would likely not have the same market value today, even though they are grown with the same techniques as other estates, and on the same terroir.

The word “terroir” became popular among French winemakers wishing to establish their estates above others, and the concept has since been supported by scientific evidence. Studies have shown that the limestone-rich soil and temperate climate in many regions of France produce grapes that make some of the best wine in the world.

In terms of Classification, though, terroir is only a small piece of the puzzle. Since 1855, vineyards in Medoc have shrunk or drastically changed borders, requiring the need for a renewed rating. In 1960, a group of wine experts lobbied for a new classification system to replace the original 1855 rating, but their request was denied. Even Robert Parker agrees that classification changes over time, and that this leaves First Growth ratings open to fallibility. On one hand, implementing a new rating system would put some estates at risk for decreased market value if they lose their First Growth status. On the other hand, refusing to change the system over the next few decades will render Classification irrelevant, as unclassified estates begin to surpass their First Growth peers. Today, competitive Medoc estates that don’t make Cru Classe status can apply to have their wines classified as Cru Bourgeois, but this category does not have the political value of a First Growth rating.

For today’s collectors, this means classification may make a difference when it comes to the value of a wine, but it’s not the final word on quality. Over the past 50 years, Napa Valley and New Zealand have become newly-established wine powers, partly because serious modern collectors are becoming more concerned with the soil in which the grapes are grown than with the established classifications of the past. In the 1970s, Napa Valley wines, despite being relatively new on the scene, began to seriously compete with French wines, forcing French producers to take another look at their techniques. These recent events signal changes in the wine world that point to the Rothschild snub as merely the first red flag of a classification system that needs to evolve, or risk being left behind.

Whether you are looking for a Grand Cru vintage to add to your collection, or you want a list of the best producers in any region, use Vinfolio’s online search tool. Our portfolio includes recent tasting reviews, as well as information about the producer and terroir.