Alsace Pinot Noir Comes into Its Own: One Region’s Fight for Greater Recognition for Their Red Wines 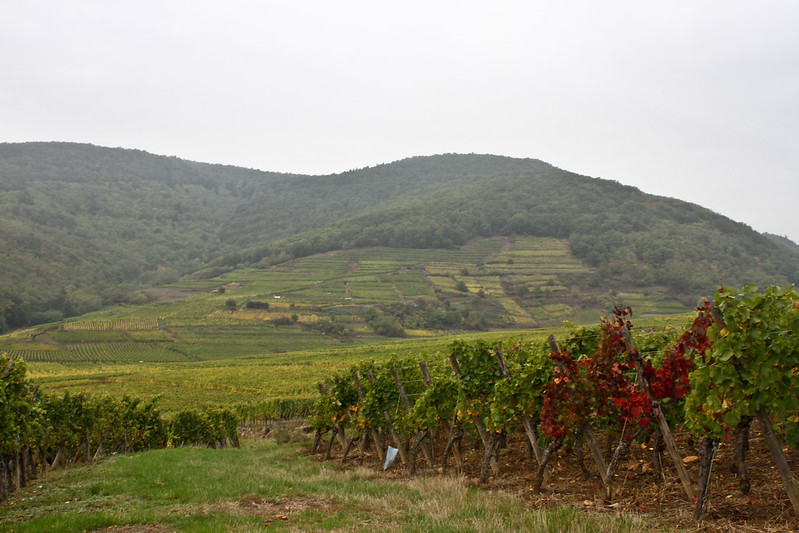 Alsace is best-known as the finest producer of Grand Cru white wine in France, but many vineyards are fighting for Grand Cru status for their red wines, such as Pinot Noir. Photo Credit: Flickr CC user Alejandro De La Cruz

In the wine industry, many still scoff at the idea of Alsace red wine; they imagine the delicate flavors of Alsace Pinot Noir, served at cool temperatures much like a Rose, believing that Alsace’s version lacks the depth and intensity of classic Pinot Noir. Today, Pinot Noir in the region has become denser and more robust, shedding its past reputation as an interesting experiment not worth collecting. Winemaker Jean-Pierre Frick says of Alsace’s red wine, “We can do just as well as Burgundy. Our climate is almost more favorable than theirs, and we also have magnificent soil in Alsace.”1 He has a point, as even critics like Jancis Robinson have noticed a shift in Pinot Noir flavors over the past decade. As the climate changes in this iconic French terroir, we can expect to see even more changes to Pinot Noir grown in the region, perhaps allowing it to compete with Burgundy on a Grand Cru level.

It isn’t just that wine critics are tasting a difference in Alsace red wines; the difference has been measured on a molecular level. A recent study found that alcohol levels in Alsace wines have increased by an average of 2.5 percent in the past 30 years as a direct result of early phenology caused by warmer seasons.2 Alsace is famous for its relatively cool climate, which provided the ideal conditions for white wine varietals such as Riesling and Chardonnay. Now that Alsace’s climate is heating up, it is becoming closer in temperature to Cote de Nuits in Burgundy, which is famous for growing the finest Pinot Noir grapes.

Alsatian winemakers like Jean-Pierre Frick are pushing for Grand Cru status for their red wines, citing the weather as the crux of their argument. It is essential for Alsace to attain Grand Cru status for its red wines in order to be taken seriously on the market, since its Grand Cru white wines are worth more on the market due to their high status. Collectors and critics alike seek out Grand Cru wines more often, and are typically willing to spend more on these bottles than unclassified wines. Grand Cru Cote de Nuits producers are also witnessing overall warmer seasons every year in Burgundy, resulting in wines that are more robust. For example, when wine critic Stephen Tanzer tried the 2011 DRC Romanee-Conti, he said, “It conveys an impression of volume and thickness without any obvious weight.” In warmer harvest seasons, the thickness of the wine is especially apparent. However, experts say that the heat is impacting different parts of France in different ways. In the past five years, Bordeaux has had to change the way it harvests its Merlot varietals, since the weather is becoming too warm for the grapes.

Alsace has not been forced to change the way it grows its red wine varietals, because it began as a relatively cool terroir. Its temperatures are slowly becoming more ideal for red wines, even as areas like Burgundy and Bordeaux are slowly becoming too warm. This is a sign that Alsace Pinot Noir is ready to be taken more seriously in the wine world, and that collectors should start to consider these bottles for their cellars. Currently, Alsace’s white wines are the only vintages that enjoy the luxury of a Grand Cru distinction, which some wine experts say is a mistake. Although white wine in the region is still of the highest quality, Alsace is working hard to put its red wines in the spotlight, and over the past five years, has produced Pinot Noir that is more than worthy of Grand Cru status. If this region persuades wine officials to give its red wines this sought-after title, it could be a game-changer that allows Alsace to compete even with Burgundy on the red wine market.

Collectors know Domaine Zind-Humbrecht for its premium white wines, but what they might not realize is that this estate is selling more red wines than it has in its history. Red wine production in Alsace has increased from 2 percent to 10 percent since 1969, and many experts believe this is because the climate in the region is getting warmer. Zind-Humbrecht is one of many Alsace domaines to take advantage of the new climate, introducing its first Pinot Noir vintage, Heimbourg, in 2009. This label is still the only red wine grown on this iconic estate, but it is already earning praise from top critics, who explain that the wine has an intense, fruit-forward palate. When this wine first appeared on the market, it had a wholesale price of about $35, on average. Since 2009, sought-after vintages of the label have increased to an average of $65 per bottle, representing an overall increase of about 85 percent.

In the Hengst terroir of Alsace, Pinot Noir has a rich history, but fell out of favor hundreds of years ago. Pinot Noir took up half of the vineyards in the region in the 17th century, but as white wine such as Gerwurztraminer became more popular, Pinot Noir vines were replaced with white varietals. Today, Pinot Noir only represents 7 percent of the total vine land in Hengst.3 This terroir is expected to be the first to reach Grand Cru status in Alsace for red wine, as producers are proving that Pinot Noir was once the most robust and necessary varietal in the terroir. Winemakers here have proposed Grand Cru distinction with strict yields, remaining at 45 hectoliters per hectare. Collectors can expect to see wines grown in Hengst as the first Grand Cru-style vintages in a decade or more, since winemakers are still perfecting their Pinot Noir labels. It will likely take at least 10 years for wine critics to warm to the idea of premium, Grand Cru Alsace red wine.

Right now, the key to collecting fine Alsace Pinot Noir is to keep bottles in the cellar for at least 10 years, or until they reach peak drinking age. Pinot Noir from Zind-Humbrecht has already shown itself to be worth more than double a collector’s initial investment after a few years in the cellar. Waiting 10 or more years has an additional benefit: it gives wine critics and French officials enough time to consider Hengst’s proposal of Grand Cru Pinot Noir, which, if it occurs, will inevitably increase the value of early vintages. Fine vintages of Alsace Grand Cru white wine sell for as much as $120 per bottle, on average, so if its red wines can reach that same status, it could lead to a huge increase in worth from the original $35 per bottle. This possibility alone makes investing in Alsace red wines today all the more promising for serious collectors looking for the next Grand Cru wine.

Whether you are starting your high-end wine collection or adding to an established portfolio, Vinfolio is your partner in buying, selling, and professional storage. We carry excellent investment wines from the best vineyards in Alsace. Contact us today to get access to the world’s finest wine.

How to Find the Perfect Super Tuscan Food Pairing
October 16, 2020
Go to Top