Do Old Vines Matter? The Case for Paying Attention to Vine Age 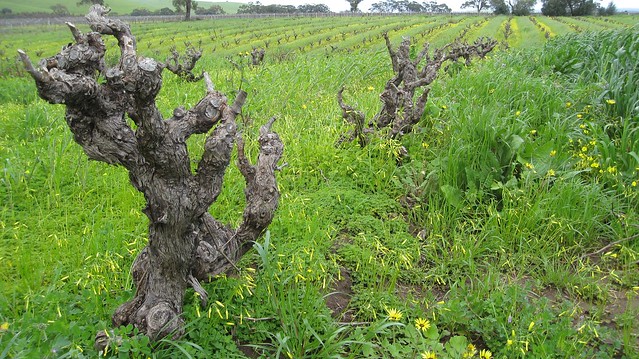 Winemaker Kirk Grace has said that a vine’s age often has less to do with the resulting wine’s flavor than the cultivation of the vine itself.1 He believes that winemakers who allow their vines to grow thick canopies of leaves will be disappointed by the results, and that vines with too few leaves have a similarly negative impact on the grapes. While Grace’s point has been proven scientifically, studies are showing that a vine’s age has a greater impact on grapes than we once thought, perhaps more so even than cultivation.

Grapevines are not physically able to produce fruit worth fermenting until they are at least five years old. Before the age of three, all grapevines produce fruit buds that are uneven in size, and whose acidity and sugar levels vary drastically within individual clusters. This uneven flavor is impossible to correct through cultivation alone, which is why most estates wait until a vine is at least half a decade old before using the grapes for wine.

Vine age has long been an important factor for premium estates in France, whose AOC regulations often specify how old a vine in the region must be before its grapes can be harvested for wine. Some of the earliest French winemakers in Burgundy found that young vines produce grapes with bright acidity, and that older vines tend to lose this acidity over time. Older vines were more sought-after by producers such as Domaine Dugat, because what the vines lacked in acidity they made up for in deeper, more complex flavors. Many believed that the acidity of young vines simply overpowered the subtlety of flavors that old vines express.

After 50 years, winemakers are forced to make a difficult decision: whether to keep their vines or plant new ones. The oldest grapevines can live to be 100 years old, but after age 50, their yields decline significantly. Many estates choose to keep these vines, supplementing their grapes with those from younger vines. The finest wines from premium estates simply produce fewer bottles of their top wines grown from old vines, making these vintages highly sought-after. Because of this, it’s a good idea for collectors to invest in wines grown from vines that are at least 50 years old, and buy a smaller percentage of wines grown from vines that are 20 years old or younger. Generally, young vines make wine that is best for drinking early, while old vines produce the finest vintages with the most cellaring potential.

The best case for the importance of vine age comes from the Musigny and Chambolle Premier Cru vintages made by Georges de Vogue. In 1986, when Francois Millet began the technical director for the estate, Georges de Vogue focused more strongly on older vines, believing that the estate’s younger vines were simply unable to fully express the Burgundy terroir. Pinot Noir grapes grown for the Musigny vintage are made using only vines that are at least 25 years old or older. Grapes grown for the Chambolle Premier Cru come from the remaining younger vines on the estate.

Both of these wines are made by the same producer, using the same techniques, but their market value and flavors are entirely different. Millet has been quoted as saying that the Chambolle, while superb in its own right, tastes more like a budding version of the more complex Musigny. Other wine critics have also noted the vast flavor differences between the two wines, further suggesting that a vine’s age has an impact on flavor. Musigny is also worth up to twice as much as Chambolle, on average, meaning that collectors would be smart to invest in wines made from older vines.

Terroir and Vines Working in Harmony

Studies have shown that the deep root systems in older vines are responsible for the differences wine critics notice in flavor. In rainy seasons, old vines can sometimes save an entire estate’s crop for the year, as they are not as impacted by weather changes as younger vines. Young vine roots skirt only the surface of the soil, sucking up excess water that seeps into the shallow upper crust of the ground. This produces grapes that tend to taste more diluted and flat. The roots of old vines are too deep below the surface to be impacted by heavy rain. They also have an advantage over young vines in hot weather. Deep roots can tap into small reservoirs of water systems located deep below the surface. During droughts, this allows old vines to produce concentrated grape juice, even when water is scarce.

Due to its intense drought conditions, many California producers are grafting newer vines onto old root systems to take advantage of old root hardiness. Excellent bottles of Zinfandel, Rhone blends, and Pinot Noir are currently being produced in the Central Coast by producers like Saxum. Many of the vines from the Central Coast are the result of grafting experiments, in which the highest-quality new vines are attached to deep roots that were planted in 1880. The grafting project has been a success, allowing old vines to be given new life while producing brightly acidic grapes that hold up to intense summer heat. Collectors should consider seeking out wines from the Central Coast that use this method, in addition to classical wines grown on very old vines.