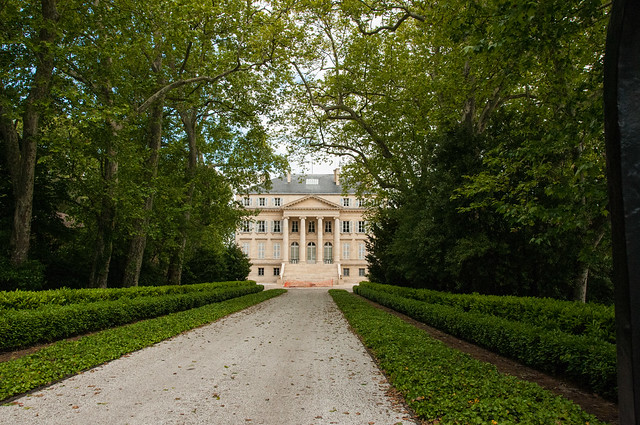 An old man I once spoke to in the beautiful, ancient village of Margaux told me that the Greek owner of Chateau Margaux, André Mentzelopoulos, had been captivated by the Ionic columns of the building at the Chateau because they reminded him of his homeland. Whatever the cause of his fascination, the Greek entrepreneur would be a crucial figure in the unusual story of Chateau Margaux’s restoration and rise into the ranks of the most respected wineries in the world.

Though Chateau Margaux had been making wine since the 1400s, and had been highly esteemed for its wines in the 1700s, by the early 1970s the economic crisis in Bordeaux had left Chateau Margaux in a state of disrepair. But at a time when the financial devastation around Bordeaux prevented winery owners from investing in their vineyards and focusing on state-of-the-art winemaking, Mentzelopoulos was a pioneer.

For starters, he relied on the famous oenologist Emile Peynaud to work his magic on the wines, reinstating production of Pavillon Rouge du Chateau Margaux by making the grape selection more strict. Meanwhile, he made plans to build the region’s first large underground cellar and restored the historic building under the supervision of inspectors from France Historic Monuments.

Through meticulous care and devotion to the estate Mentzelopoulos led the Chateau towards a renaissance of its architectural and viticultural heritage. Unfortunately, he passed away in 1980 and had little time to enjoy the fruits of his labor. However, his work had paid off. The 1978 Chateau Margaux was already recognized as a unique vintage, a valuation which has remained unchanged to our day; in fact, the vintage is considered one of the very best in all of the Chateau’s history.

Chateau Margaux with a Feminine Touch

If connoisseurs had been concerned about a Greek man owning Margaux, they were doubly concerned when the man who revitalized the estate was no longer there to continue his work. Upon his death, Mentzelopoulos left the Chateau to his daughter Corinne who was, at the time, barely 27.

“My father died when I was 27. I wasn’t prepared at all. I was the financial controller in his stores,” she once told a reporter. But Andre Mentzelopoulos knew what he was doing. Shortly after taking over, his daughter saw international demand for Margaux skyrocket, Robert Parker gave the 1982 vintage 100 points, and the Chateau’s name just kept getting bigger. Americans wanted first growth Bordeaux like never before, and everybody else followed.

Originally, Corinne was reluctant to innovate, but she showed great inspiration and business savvy when she appointed Paul Pontallier as manager of the estate in 1983. Over the years, Pontallier has infused new life into the winery, improving drainage and building a new underground cellar. He quickly became a celebrity in the fine wine world, and many of the wines created under his reign have become classics.

Perhaps another one of Corinne’s secrets has to do with her particular vision of wine itself. Mentzelopoulos does not believe in wines in which one particular aspect stands out. Instead, she believes in a perfect balance between all of the wine’s components.

Corinne is still impressed by the wines the Chateau produces. An American friend told me he was once at a tasting with her in the U.S., and she appeared to be genuinely amazed by the quality of the 1983 vintage, which she claimed she had not tried in a while. Contrary to what I was once told, Corinne doesn’t drink Chateau Margaux with every meal as she believes it would “spoil” her.

From Asia to Biodynamics

Besides its many traditional markets, the Chateau has lately been focusing on China. They recently opened an office in Shanghai, and Corinne is excited about the interest the Chinese collectors have in “understanding the wine.” The Chateau’s Asian expansion also included a wine tasting in Hong Kong last year, when Pontallier gave testimony of his and Corinne’s passion for innovation, unveiling experimental wines made using organic and biodynamic techniques. In some blind tastings, biodynamic wines performed very well, perhaps paving the way for an upcoming new era in the life of Chateau Margaux.

With the new architectural additions to the estate, including a brand new winemaking lab, ongoing biodynamic experiments, and demand for Premier Cru Bordeaux ever on the rise, there is really no telling how far Margaux can go. One thing is certain. Corinne Mentzelopoulos loves winemaking and will keep innovating and honoring the French estate’s tradition and her father’s memory. “I love it when the harvest starts,” she once said, “It’s a bit nostalgic when it stops, but it means the grapes are nice and safe inside.”

Perhaps it is her idealistic Greek blood speaking when Corinne talks about not wanting to make a cult wine that sells out before even being released. “What do I do then? Sit around all day and buy 10 Rolls-Royces and 20 yachts?” she once commented, when asked about the prospect of partnering with a California winery to make french-style California cabernet. And many a Margaux enthusiast like myself believe she was right when she claimed that no matter how hard one might work at such a project, “we couldn’t produce something as good as Chateau Margaux.”

Whether you are starting your high-end wine collection or adding to an established portfolio, Vinfolio is your partner in buying, selling, and professional storage. We carry wines from some of the finest Chateau Margaux vintages, as well as other fine Bordeaux wines. Contact us today to get access to the world’s best wine.