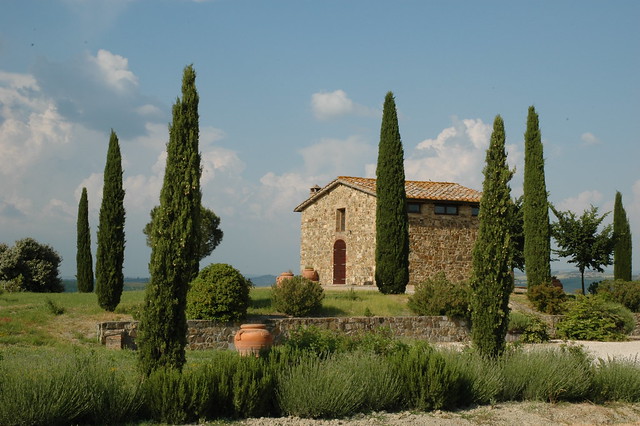 Brunello di Montalcino has the longest aging requirement of all Italian wines. With a spectacular performance at international auctions and some excellent recent vintages, it has become one of the most coveted wines for collectors. Auctions have lately seen a lot of interesting Brunello action; a 1964 Biondi Santi Tenuta il Greppo Riserva sold for 14,000 Euros, the highest price ever paid for an Italian wine.

The hype is well-deserved. Brunello, which means “little dark one,” is not an easily forgotten wine. I can still remember the first time I tried it, sitting at an Italian restaurant by Puget Sound. As I tasted it, watching the freezing night air of the North Pacific gust outside the window, I could imagine myself in Tuscany, watching the breeze shake the vines at the estate where the wine is produced. It was this tasting experience, and a conversation with the sommelier who had spent a month visiting wineries in the south Tuscan region, that inspired me to make a trip of my own.

I had been to Tuscany many times. I had visited many wineries. But I had never seen Montalcino for some reason — perhaps it was a treat I wasn’t meant to experience until then. The charm of a small town with a strong winemaking identity was apparent in every facet of Montalcino, from the quaint wine shops to the traditional cantinas that serve Tuscan food cooked by real-life Italian mammas.

I will never forget the delicious pinci pasta — Montalcino’s most traditional dish and a great food pairing for Brunello — and my lively Italian hosts, who had been involved in wine commerce for three generations. The exceptional wines I tried, the glorious Tuscan sunshine, and the relaxing meadows around the wineries made the trip unforgettable.
The region of Montalcino offers a micro-climate perfectly primed for the growth of the unique grape that gives the wine its unmistakable character. The original idea of Ferruccio Biondi-Santi in creating Brunello di Montalcino was to make a wine with great power and structure suitable for long aging; a combination that any collector would find very hard to resist.

If you don’t have a chance to visit Montalcino anytime soon, I believe there are a few perfect wines that can capture some of the Tuscan joy of life I experienced in the region. Personally, it would be hard for me to keep an impressive Brunello unopened for years, but patience is generally rewarded by the wine’s superb aging qualities, which make a good Brunello vintage a kind of Holy Grail for collectors.

The first thing you notice about the Valdicava 2001 is that it is dark as night. While some may be taken aback by the nearly black color, the intensity of its licorice and dark berry aromas, with hints of oak and bitter chocolate, are remarkably satisfying. On the palate, it is velvety, rich in blackberry and tannins with a long and generous finish. It is not a typical Brunello, and its sheer originality is one of the most exciting things about it. It is ripe for drinking today and will continue to evolve well into the future.

2010 was an exceptional year for Brunello di Montalcino. On account of the relatively warm maturation phase and pronounced day and night temperature changes, producers called 2010 “a perfect growing year.” After trying a few great Brunellos from that year, I can only agree, and the Cerbaiona is among the very best.

The most distinctive quality of this wine is perhaps the harmony of its blend of myriad aromas, from plum to blackcurrant, from lavender to rose petal, from licorice to smoked meat. On the palate, it is equally exotic, offering a complex layering of sweet fruit and sour tannins. With an unparalleled unctuous texture, the Cerbaiona 2010 offers everything one might expect from an outstanding Brunello di Montalcino. According to Wine Advocate’s Robert Parker, it is one of the top three wines of that impressive vintage. It is in fact the only modern wine ever to receive a 100 score from Antonio Galloni. You can start uncorking your Cerbaiona in 2017, and if you purchase a few bottles, they will be every bit as extraordinary for decades to come.

If you want to know classic Brunello, you have to know Gianfranco Soldera. The proprietor of this bottle, who has been known to handpick only 10% of his vineyards’ yields to ensure quality, has many original ideas about winemaking and wine preservation. For example, his bottles have especially high necks and wide shoulders because he believes it preserves the flavor of the wine better.

The Brunello di Montalcino Riserva 2004 is one of Soldera’s most personal creations. Its aromas evoke the wild forest and all its elements, including capers, peat, balsamic, and coffee. The taste integrates many of the same earthy elements with perfect tannins, bitter herbs, cloves, and chili. Complex and elegant, it offers a long and absolutely rewarding finish.

According to Soldera, people are used to drinking “dead wines.” In contrast, his creations are very much alive; they keep changing and evolving in the glass, offering a variety of nuances that some wine drinkers may find hard to understand. He believes Brunello should be made only of Sangiovese grapes and he does not use small barrels, because in his view, only wines that haven’t received enough tannins and aromas from the grapes themselves need to acquire excessive oak sensations.

More than any other Brunello di Montalcino, this Soldera is an experience. Made from select grapes and under the supervision of one of the world’s greatest winemakers, it is an essential item for any serious Brunello collector. You can enjoy it today, and it will also reward those who wait a few decades.

The Marroneto Madonna Delle Grazie is one of Brunello´s highest expressions, with the added value of coming from the best ever vintage of Sangiovese on record. A waft of floral aromas introduces the ruby-colored Marroneto to the nose, with rose, rich berries, violet, and fresh mint. On the palate, the floral scents evolve into sweet dark berries, licorice, and a hint of tobacco. Firm tannins provide the backbone for the wine’s personality and lingering taste. It is excellent now, and will be superb in twenty years. Thus, the Madonna Delle Grazie 2010 is ideal for cellaring.

If you visit the Casanova di Neri winery, you will probably be guided by Gianlorenzo, a member of the third generation in his lineage of savvy Tuscan winemakers. The winery is one of region’s largest producers at 200,000 bottles a year.

Casanova di Neri made its name with Sangiovese Grosso, and it’s the producer of some of the world’s most coveted Brunello de Montalcino vintages. While it produces other outstanding Brunellos, the Cerretalto is the winery’s highest expression of a wine made with Sangiovese grapes. 2007 offered a perfect growing season for these grapes, which makes this vintage all the more attractive.

The Cerretalto offers Brunello’s characteristic darkness and earthiness with hints of raspberry, milk chocolate, and spice, both on the nose and on the palate. Velvety tannins with balanced acidity ensure structure and an exquisite, long-lasting finish. Consistent over the years, several vintages of this wine have received 95+ ratings from the world’s top experts. The 2007 Cerretalto will evolve gracefully over the next 20 years and beyond.

The Valdicava, much like Casanova di Neri’s lower-end Brunello, is a blockbuster wine, while the Soldera, the Marronetto, and the Cerretalto are lessons in subtlety and refinement. The Cerbaiona lies somewhere in the middle: challenging enough, but not inaccessible for those just starting their collection. Indeed, as Tuscany’s only single-grape denomination wine, it is something no serious collector should be without.

If you are interested in collecting Brunello, you can have it cellared by the professionals at Vinfolio until it has matured. At Vinfolio, we understand the power and the mystery of the Brunellos, because we’ve cellared them, sold them, and enjoyed them for years.

Whether you are just starting your high-end wine purchasing or adding to an established collection, Vinfolio is your partner in buying, selling, and professional storage. Contact us today to gain access to the world’s best collectible wine.